Zimbabwe’s Rutendo Nyahora has her sights set on defending her title in the Port Elizabeth leg of the SPAR Women’s Challenge at Pollok Beach on Saturday.

“It won’t be easy as I am often my own worst enemy,” said Nyahora. “Once you have won a race, you place pressure on yourself to do again.

“All eyes are on you to succeed again, so this year’s race will not only be a physical challenge, but a psychological one too.”

The 25-year-old Nedbank Running Club athlete admitted that the pressure got to her when she failed to defend her title at the Cape Town leg earlier this month. She placed fourth in 33 minutes 30 seconds.

“I lost focus and didn’t know how fast my competitors were going to be. Last year, I just ran the race without any pressure.”

She said she had been training very hard and had made it her goal to win the PE race – and improve on last year’s time of 33:09.

“This race suits me as there are no major up or downhills. It is also very well organised, the people are friendly and the support along the course motivates you.”

Although Nyahora was born and raised in Zimbabwe, she spends most of her time in Pretoria to focus on her running career.

“I decided to run in South Africa because there are not many organised races in my home country and it is difficult to get noticed if you have talent.

“Over here you have a lot of scope to prove you have what it takes.”

Nyahora, who has been running competitively since 2004, said she currently focused on 10 and 21km races, but her dream was to compete in the marathon at the Rio Olympics in 2016.

Because of her nationality, she does not qualify for the overall prizes in the six-leg Grand Prix series that forms part of the SPAR Women’s Challenge events.

According to SPAR Eastern Cape marketing manager Abri Swart, around 10 000 entries had already been processed by Wednesday morning and he expected a field of around 14 000 to line up on race day.

He said that although photographs would be available on the race website and social media platforms afterwards, the photos and video of contestants crossing the finishing line would not be available due to technical issues.

“Runners will however still receive an SMS with their time and position at the finish.” 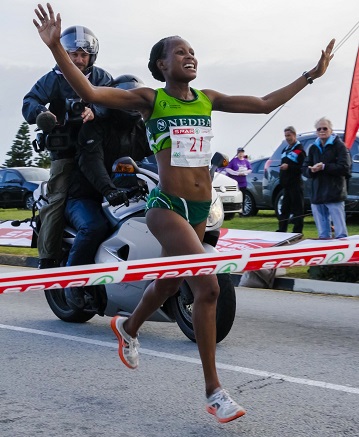 Last year’s winner Rutendo Nyahora (Nedbank AGN) will be looking to defend her title in the Port Elizabeth leg of the SPAR Women’s Challenge on Saturday, May 3. Photo: Wayne Webb