FNB NMMU head coach David Maidza has made several strategic changes to his side that will take on defending champions FNB Tuks in their crucial sixth-round FNB Varsity Cup encounter in Pretoria tonight.

The penultimate game of the round-robin tournament could be a defining moment for the team from Port Elizabeth, who have had mixed fortunes in the tournament thus far.

“The win against Wits was the right result for us to take into the Tuks game,” said Maidza, whose Madibaz outfit claimed a confidence-boosting 18-12 win in Johannesburg last week.

“We know that we will certainly be up against a formidable team but we are confident that we’ve managed to fix our problems on the field and are ready for the challenge.”

Aiming to put maximum points on the board will be kicker Gavin Hauptfleisch, who returns to the flyhalf position.

Vice-captain Jarryd Buys will be back in control and on familiar turf at fullback.

He said the new options had given him the flexibility to move Stefan Willemse to openside flank in place of Marcel Groenewald.

Number eight kingpin Timothy Agaba takes a well-deserved breather on the bench, with Groenewald starting in his place.

“Jody Reyneke gets a start ahead of Martin Ferreira who has done a sterling job at hooker,” said Maidza.

“I feel the fresh legs on Jody will help at this stage of the competition.”

Maidza said his men were determined to book their berth in the semifinals and would not surrender without a fight.

A mere three points currently separate Madibaz, who lie fifth on the log, and second-placed Tuks.

“We want to continue with the improvements and gains we have made in the last week and will be looking to finish the round-robin stage with very strong and clinical performances.

“The destiny of the playoffs is in our hands and we are well aware of the task we have before us.” 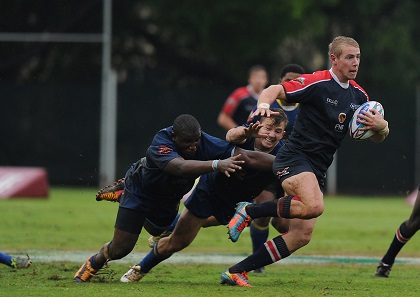 Centre Michael Bernardt will be part of the Madibaz starting line-up for the critical away game against defending champions FNB Tuks on Monday evening.