Madibaz striker Natius Malgraff has been selected for the South African men’s hockey side to compete in the Sultan Azlan Shah Cup, which starts in Malaysia on Thursday.

The six-nation tournament will see the Proteas take on Canada, Korea, China, Australia and the host country in a round-robin format.

“We stand a good chance of a top-three finish, with Australia the favourites to take the cup,” said Malgraff.

This will be his third national call-up in as many months, after playing in a five-test series against Argentina in February, as well as three international fixtures against Olympic champions Germany in Cape Town last week.

South Africa, ranked number 11 in the world, went down 4-0 to the South Americans and 3-0 to the European team.

Malgraff said his personal highlight of the Argentinian tour had been scoring a goal to give his country a 2-1 lead in the final match, which eventually ended in a draw.

“Playing against the Olympic champions was also an absolute treat. I never chased after a piece of leather like that in my life!”

The first-year mechanical engineering student said each of these tournaments had been treated as a training camp, with 18 members of the 34-man squad selected for each game.

His Madibaz teammate, Chad Cairncross, also attended the Cape Town camp and will join Malgraff in the training squad for the World Cup, which takes place in the Netherlands in June.

Although still a junior member of the Nelson Mandela Metropolitan University team, Malgraff is already a veteran of international competition.

He first received his SA colours as an under-16 player in 2009 and rose through the ranks before making his debut for the senior men’s team at the FIH Champions Challenge in Argentina in 2012.

Last year, the East London-born sportsman was also a member of the SA under-21 side that participated in the Junior World Cup in India.

“I started playing hockey at St John’s Road Primary, where I was given a chance to develop my skills by the few coaches that saw greatness in me,” said Malgraff.

“Then I went to Hudson Park High, where the first team coach recruited me in grade eight, and from then on I’ve been making something out of my hockey.”

Malgraff said it was through the support and encouragement of family and friends that he had been able to live out his dreams.

He said he was thrilled to be playing against one of his long-time heroes – Aussie forward Jamie Dwyer – in Malaysia.

“He has phenomenal skills and is close to being a god in hockey.”

The young goal-scorer said his ambitions for this year included making the World Cup team and to attend the Commonwealth Games in Glasgow.

“There are a few seniors who still need to come back into the side. Only time will tell.” 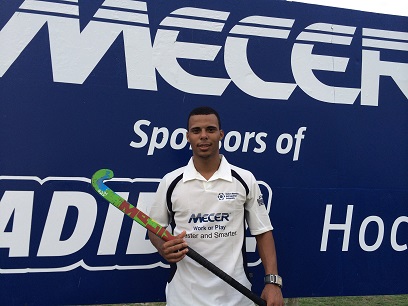 Madibaz striker Natius Malgraff has been selected for the South African men’s hockey side that will compete in the Sultan Azlan Shah Cup in Malaysia from Thursday.