FNB NMMU continued their march towards the FNB Varsity Cup semifinals in a water-logged 19-9 win over defending champions FNB Tuks in Pretoria on Monday evening.

The Madibaz did well to maintain control of the game in foul weather conditions that caused play to break down on several occasions.

“Having said that, there weren’t many handling errors from either team. It was actually a high quality game.”

Maidza said he was very happy with the cohesive and determined performance from his players.

“I think the boys did very well to stick to the systems and structures and really played together as a team.”

He said he was heartened by the improvement shown in various facets of their game that had been lacking in previous weeks.

“Every week it’s a case of improving those facets that we’re not great at. I thought our defensive effort was brilliant and our game management was also spot on.”

Maidza said where there had been handling errors, these had been on the attack rather than in their key defensive aspects.

The men from Port Elizabeth have now jumped two places in the standings and currently lie third overall behind FNB Ikeys and log leaders FNB NWU-Pukke.

They face FNB Shimlas in their final must-win match of the round-robin section next week.

“There’s no other way of us getting into the semis apart from winning. We know what we have to do when we get to Bloem on Monday.”

Although sixth-placed Shimlas have trailed Madibaz throughout the tournament, Maidza said they still posed a serious challenge.

“I think Shimlas have been a bit unfortunate in a lot of their games this season and they will definitely have an eye on the semis.”

He said every team was a potential threat; therefore his side would have to ensure that their energy and concentration levels were high and their tactics correct.

“It’s going to be a tough game. We know it’s not going to be easy for us to get through, especially playing away from home.

“Our destiny is in our hands – now we just need to grab it.” 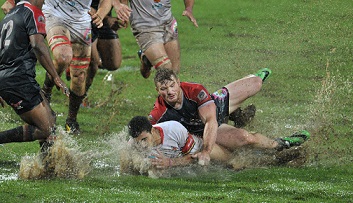