Eight-time national road race champion Anriette Schoeman will have another bite at the cherry when she takes on South Africa’s cycling elite at the annual championships in Durban this weekend.

Schoeman, who will race in the colours of Bestmed-Africa Silks, said she believed she still had another title in her after winning the 106km Classic at The Herald VW Cycle Tour in Port Elizabeth on Sunday.

“I’ve been national elite champion eight times and it’s always special when you wear the green and gold band.”

“Ashleigh is always strong and has had a fantastic base and training camp with her new team so, yes, she will probably be the one to watch.”

It should prove to be an interesting tussle between the two cyclists, who each hold a title in the two biggest road races in SA.

Moolman-Pasio beat Schoeman to the line in the Momentum 94.7 Cycle Challenge in November, while Schoeman claimed her seventh win in the Cape Argus Pick n Pay Cycle Tour earlier in the year.

She said the road champs would be an important gauge of her chances ahead of her title defence.

“The Argus is a kind of lottery. You can be the best prepared and have the worst day out and vice versa, so I never count my chickens.

“I have a love-hate relationship with the race but it will always be a magical one to win.”

Schoeman said she had not had a chance to ride the national championships course but did not believe it would affect her odds.

“I’ve trained hard and at the end of the day it’s the same for every rider. I know it will be a long race, which makes it harder, especially at the start of the season.”

She said she was aiming to do well in her goal races as she was hoping to make the team for the Commonwealth Games in Scotland in July.

After almost two decades in the sport, Schoeman said she was looking forward to her new role as brand ambassador for Bestmed.

“I’ll be part of Bestmed for the 2014 season and I hope to extend my relationship with the brand in the future.”

As part of her ambassadorial responsibilities, she will be participating in the eight cycling events sponsored by the medical aid company.

“It’s fantastic that they are willing to invest in cycling and I feel privileged to be part of it.”

Bestmed ASG team boss Owen Botha, who previously managed Schoeman as part of the Nashua women’s cycling team, said he was delighted to have her on board.

“Anriette has a cult-like following in South Africa and her record speaks for itself.”

Although she will not be part of his 14-strong team, Botha said he hoped his young riders would follow her example.

“She worked hard to get the successes she has amassed and her professionalism over the years has always remained high. This dedication and attention to detail will hopefully rub off on the youngsters.” 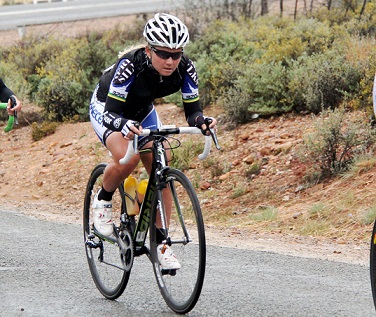 Eight-time national road champion Anriette Schoeman (Africa Silks-Bestmed) will once again have her eyes on the prize in Durban this weekend.