The four-day road tour, which starts in Franschhoek on March 4, will pit Sauser’s stellar line-up of mountain bikers against the cream of South African roadies.

They will face off against pro teams like Abantu, Bonitas and the local MTN-Qhubeka outfit, which includes last year’s champion Nic Dougall.

“I’m glad there will be good competition! It will make the race interesting and it lifts our game too,” said Sauser.

“We as mountain bikers will be very motivated to give the pro road teams a good run.”

He said former WorldTour road rider Rabon, who made the switch to off-road racing this year, would be the team’s “best horse” for the European-style tour.

“I hope Rabon will win the prologue time-trial, although that means on the remaining stages there will be work awaiting us to possibly defend the jersey.”

All eyes will be on the three-time Czech time-trial champion during the 21km stage from the Berg River Dam to the top of Helshoogte Pass.

The last of these ends with a dramatic mountaintop finish on the spectacular Franschhoek Pass.

“If the race is tactical, we sure will benefit from his experience,” said the 37-year-old Swiss national.

“But when it comes to the racing up Franschhoek Pass for the final showdown, the legs will do the talking!”

As one of only two road races he will do this season, Sauser said he was looking forward to the Western Cape tour.

“For me, it’s free hard speed training with lots of added excitement.”

The former Olympic bronze medallist said roadwork formed an important part of his preparations for international commitments like the Cape Epic.

“I train around thirty per cent on the road, especially intervals like power workouts. The power meter is a great tool for it and those numbers really kick my butt!”

Sauser, who spends part of the year training in Stellenbosch, said he enjoyed participating in local races wherever possible.

“Stellenbosch is giving me so much, so it’s great to give back to those organisers who are dedicated to cycling. At the end of the day, everybody benefits.”

He said the success of events like the Bestmed Tour de Boland depended largely on those individuals and sponsors who were willing to develop road cycling and spend time and energy on it.

“I think there are not more than three in the country. On the other hand, we have more than 40 mountain bike stage races.

“So it’s really important to assist road tours to develop talent and provide exposure and experience.”

Aside from the pros, this year’s Bestmed Tour de Boland will also feature categories for amateurs. 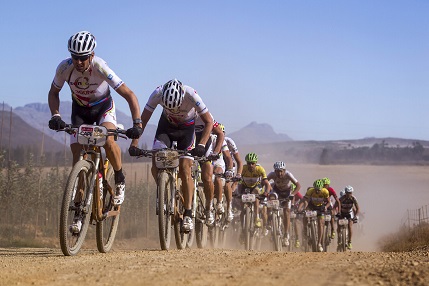