FNB Madibaz held a dominant FNB UJ at bay to claim a nail-biting 21-15 win in their first away game of this year’s FNB Varsity Cup, presented by Steinhoff International, in Johannesburg on Monday evening.

Triumphant head coach David Maidza praised his side for their solid defensive work in the face of a relentless onslaught by the home team.

“The boys really stepped up. That was one of the best performances from a team perspective that I’ve ever been involved in in my coaching career.”

He said the forwards had done well to stem the mauls, while the backs had stopped any plays that went wide.

“Defensively we just stumped them. We shut them out for long periods and, with the amount of ball possession they had, I felt they could have put more points on the board.”

Despite having very little possession, Maidza’s men managed to hold back the orange tide at the University of Johannesburg stadium.

“We had to defend for three-quarters of the game and I think we had about 30 per cent possession. But the little that we had we utilised effectively.”

The Port Elizabeth side led 8-5 going into the break, whereafter a try by FNB Madibaz and a converted try by FNB UJ saw them lock horns once again at 13 all.

After a brief scuffle on the field, both sides were down to 14 men. Then a penalty by the home team saw them go two points ahead.

“It was always going to be that kind of game because of the forward friction,” said Maidza.

“They played everything upfront and tried to outmuscle us but our forwards definitely stood up to them.”

The match went down to the wire with a successful maul by the visitors in the final moments.

“We got a penalty with a minute to go, kicked it out and drove forward again, setting up for Chris Cloete to drive over and win the game.”

Although he was happy with the result, Maidza said playing defensively for most of the 80 minutes was far from ideal.

“What was also not good was our error rate – I think we handed over too much ball for them to play with. We can definitely look at that and see if we can improve on it in the coming week.”

Maidza said unforced errors, knock-ons and other mistakes had cost them penalty after penalty.

“We were pretty good with that against Maties and I think we can do the job next week.”

The PE-based outfit will face FNB UCT on home turf at the NMMU Stadium on Monday.

“Now it’s just a matter of refocusing and setting the goals for the Ikeys game. It’s another game and another challenge where we’ve got to step up and keep on with the hunger that we’ve shown so far.

“I think if we keep showing the character that we’ve shown in the last two games it will definitely help our progress through the round-robin matches.” 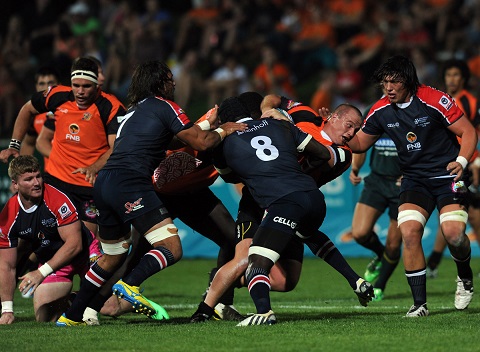 FNB Madibaz held a dominant FNB UJ at bay to claim a nail-biting 21-15 win in their first away game of this year’s FNB Varsity Cup, presented by Steinhoff International, in Johannesburg on Monday evening.