Bestmed continues to expand its footprint in South African cycling through its sponsorship of eight races on the national calendar and the Bestmed-ASG women’s team.

This year the medical scheme has added the new Bestmed Powerade Sun City road cycle challenge to its existing line-up, which includes both road and mountain bike races in Gauteng, Mpumalanga and the Eastern and Western Cape.

Race organiser Wynand de Villiers said Bestmed was the first corporate entity to see the value in a year-round blanket event sponsorship across all disciplines and in most provinces in South Africa.

“They have crept into the hearts of cyclists by helping to resurrect events like the Jock Cycle Classique and Tour de Boland, which are co-presented by ASG.

“Their sponsorship of these events in particular shows that they truly support the sport and that it’s not just a brand-awareness exercise.”

De Villiers said the four-day Bestmed Tour de Boland, which starts in Stellenbosch on March 4, was one of the country’s few international road tours and aimed to develop world-class African cyclists.

De Villiers said all of the top local pro teams had confirmed their attendance and that the field would also be open to amateurs across various gender and age categories.

According to Bestmed’s head of sponsorship Sasja la Grange, the growth of mass participation events in cycling had presented the scheme with an increasing number of opportunities to get more involved in the sport.

“So we could seriously look into expanding our sponsorship strategy.”

La Grange said sponsoring sporting events was a natural extension of Bestmed’s business and that these provided a platform for encouraging people to build sustainable, health conscious lifestyles.

“Bestmed is in a position to see first-hand how lifestyle is influencing people’s illness in South Africa.

“As a strategy to prevent and control chronic illness and other illnesses, we decided to support sports development.”

While many other companies had decided to invest in sporting codes such as rugby, golf and swimming, La Grange said Bestmed had opted for cycling.

“Our view is that cycling is one of the fastest growing sports in SA and is enjoyed by professional and social cyclists. We especially encourage families to get involved in the mountain bike races.

“We aim to grow by attracting a younger market for our cross-subsidisation model to work effectively. Cycling certainly fits our demographic.”

She said Bestmed’s involvement in the often under-supported arena of women’s cycling was also starting to pay dividends.

In the road races, Juanita Venter claimed the champion’s jersey in the 35-39 age group while Monique Gerber finished second in the junior girls’ event.

Gerber was also runner-up behind team-mate Michelle Benson in the time-trial.

“We are very excited about their performances,” said La Grange.

Enter the Bestmed Tour de Boland at www.asgevents.co.za before February 21. For more information, find the race on Facebook or follow @TourdeBoland. 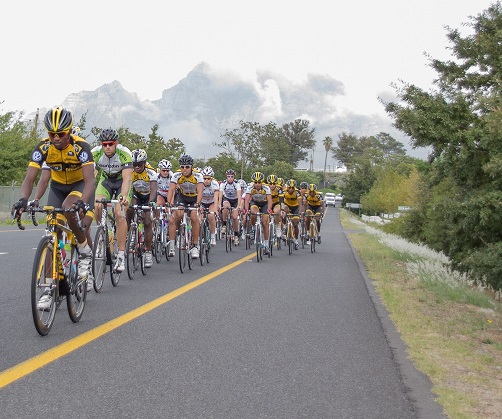 Riders in action during last year’s Bestmed Tour de Boland in the Western Cape’s wine country. The 2014 edition of the four-day tour starts on March 4.