FNB NMMU may have suffered their first defeat in this year’s FNB Varsity Cup but head coach David Maidza remains optimistic about their march towards the semi-final.

The Port Elizabeth side went down 26-13 to FNB UCT in front of a packed Madibaz stadium on Monday evening – their first loss on home soil since 2012.

“I’m definitely not feeling down and I told the players that their heads shouldn’t be down right now either,” said Maidza.

“I thought the boys were fantastic. You cannot fault them for their effort on the field and I’m feeling very positive about that.”

The Madibaz got off to a rocky start after conceding a soft try by Shaun McDonald, within the first five minutes. The conversion by Dean Grant opened up an early 8-0 lead for the Cape Town team.

The home side levelled the scores fifteen minutes later with a converted try of their own by Michael Bernardt.

Ikeys fired back just before half-time when Lihleli Xoli crossed the line and Grant once again put the ball between the posts to take the score to 16-8.

Early in the second half, a penalty put two more points on the board for the Western Cape team.

The men from NMMU kept plugging away but were unable to penetrate the opposition’s defences.

With the score at 18-13, a final intercept try by FNB UCT’s Richard Stewart, converted in the dying seconds, sealed the Madibaz’ fate.

“You have to give it to them, Ikeys used their opportunities. When their chances to score came, they took them,” said Maidza.

“We had a lot of ball to execute. Unfortunately, we just didn’t finish off properly, especially in the last 15 to 20 minutes of the second half.”

But, he said, that was what the game of rugby was all about.

“It’s important for us to understand that if you go out and don’t take the opportunities that you create you’ll come off second best.

“I think that will be one of the lessons that we can take from this.”

However, Maidza said the team would not be going back to the drawing board after Monday night’s encounter.

“I’m not going to look at this result and try to reinvent the wheel. I think we’re on a good track.”

He said the wisest approach would be to play to his team’s own strengths and continue doing what they did best.

“We took it on the chin and we’ve just got to get up again and refocus our energies on the next game against Pukke.”

Although he expected another tough home game against the team from North-West University, Maidza said his squad would prepare with the same intensity as for any other match.

“We’re within striking range of the top and that’s what we’re looking for. We want to be there come the end of the round robin component in the semi-final spot.”

Doing so meant they had to keep moving forward and not make mistakes in the remaining fixtures, said Maidza.

“We’ve got a group of players who show character and we will definitely go from strength to strength. This loss is just a little blip along the way.” 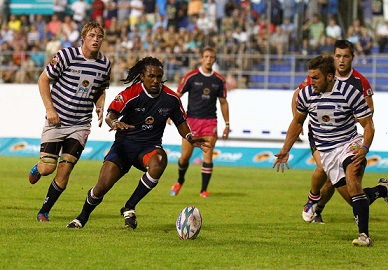 Winger Tythan Adams of FNB Madibaz chases down a loose ball in the FNB Varsity Cup game against FNB UCT in Port Elizabeth on Monday evening. The home side went down 26-13 to the Ikeys.