South Africa’s most-capped netball player Zanele Mdodana will swap courts for cleats when she lines up at The Herald VW Cycle Tour in Port Elizabeth on Sunday.

The former SPAR Proteas captain will participate in her first ever cycle race – the 55km Pursuit – as part of the Vukani Multi Sport Club development team.

“I’m definitely excited about it and a bit nervous,” said 29-year-old Mdodana.

“But I’m not competing with anyone, so I’m going to take my time and just ensure that I complete the course.”

She said she had already ridden the route to see what she would be in for on race day.

The local sports star joined the PE-based club this year after meeting a group of friends who were “really into triathlon”.

“I joined them for training – mainly running – and then got really interested in cycling and swimming.”

Mdodana, who has made 70 international appearances for her country, said she had at least two more years of competitive netball ahead of her.

“After the World Cup, I’ll probably hang up my boots and focus more on triathlon.”

“I usually only ride with two or three people, so I’ll need to get used to bunch riding before the race. So I’ll try and do a couple of bunch training sessions in preparation.”

It was started two years ago by Mfula, Monde Mabala and Jabu Mpengesi and currently boasts over 40 members. They meet at various teammates’ homes or the gym, as they do not have a base as yet.

“The objective was to introduce the triathlon disciplines and grow participation,” said Mfula.

“Opportunities like The Herald VW Cycle Tour are a good ground for us as Team Vukani to develop and test our cyclists among the best in the sport.”

Some 16 members – clad in the distinctive orange, white and black kit – will participate as sponsored entries in the road and mountain bike races throughout the weekend festival of cycling.

One of their number, Simphiwe Mandla, will compete for the Ultimate Quest title, which rewards the best rider on aggregate in the 106km Classic road race in PE and 80km Extreme mountain bike challenge at Addo.

Mfula, who is a five-time Ironman finisher, said the members travelled a lot to participate in various cycling events countrywide but that competing at home was a different matter.

“This is where our friends, family and supporters are. It’s a great opportunity for them to witness where all that time and effort we invested is going – and we have fun out there.”

He said the event would provide the club with the opportunity to demonstrate their progress in developing cycling among the previously disadvantaged.

“Our members are a mixed bag, which means some are more needy than others. This is where the race organisers stepped in; to support those who would otherwise have difficulty participating.

“We are very appreciative of that.”

For information and late entry details visit www.heraldcycletour.co.za. For breaking news follow @heraldcycletour or find the race on Facebook. 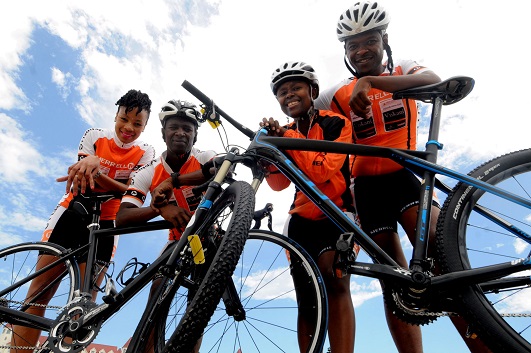