The Herald VW Cycle Tour has joined forces with the Pedal Power Association to promote “Safe Cycling” on the streets of Nelson Mandela Bay.

The Eastern Cape leg of the national awareness and lobbying campaign, which encourages motorists to keep a 1.5-metre distance from cyclists, was launched in Port Elizabeth this week.

According to The Herald’s chief marketing officer Justin Peel, creating a safe cycling environment was critical for both cyclists and motorists alike.

“Through this campaign, the Pedal Power Association is doing a phenomenal job in highlighting this worthy cause.

“We are extremely proud to be able to partner with and support this worthwhile initiative.”

Peel said an eye-catching 10-metre billboard had been erected on the corner of Strandfontein Road and La Roche Drive in PE, as well as on the outgoing road towards Uitenhage.

The core message of “cyclists stay alive at 1.5m” will be reiterated on lamp-pole advertising on major cycling routes throughout the city.

“What we’re trying to do is make motorists more aware of cyclists. It’s a matter of tolerance; we’re not trying to force it down anyone’s throat.”

Hayward said the Western Cape became the first provincial government to sign it into law in November last year.

“They’ve only given us one metre but that’s the first step. That means that anyone who hits a cyclist in that province is now going to face the full wrath of the law.”

He said the Eastern Cape event, which takes place in Addo and PE on February 1 and 2, provided the ideal platform for launching their national lobbying campaign.

“If we can get every province to do what the Western Cape has done, it will go a long way in saving lives.

“Our plan is to take part in road races in every province and to hold a memorial ride ahead of each race in memory of those cyclists who have died.”

The “Safe Cycling” campaign, which was first launched in February 2012, gained nationwide momentum after mountain biking champion Burry Stander was killed during a training ride on January 3 last year.

Hayward said the cause was also personal to him, as his brother-in-law had been knocked down and killed while out training in PE. He said the date for the local memorial ride had not yet been finalised.

He encouraged participants to order their branded cycling shirts from the PPA website to create maximum visibility on race day.

In addition, all cycle tour participants will receive free vehicle bumper stickers in their goodie bags.

Among the goodie bag items will be a full-colour souvenir race booklet, courtesy of official printing sponsor Bukani Print.

Managing director Iqbal Sain said the company was proud of its long-standing relationship with the weekend festival of cycling.

“Our participation is part of our commitment and social responsibility to the environment in which we operate our business and raise our families.”

Both avid sportsmen and runners, Sain and business partner Alan Taylor had thrown their weight behind the safety campaign.

“Our involvement in a number of sporting events over the years has been a big part of the culture we encourage at Bukani. We aspire for PE to be a chosen destination for many more sporting events.”

“Having a booklet, like a medal, acts as a memento and adds that human touch which society in general is sadly learning to do without.”

Get an entry form from any Nelson Mandela Bay cycle store or enter online at www.heraldcycletour.co.za before January 20. Find the race on Facebook or follow @heraldcycletour. 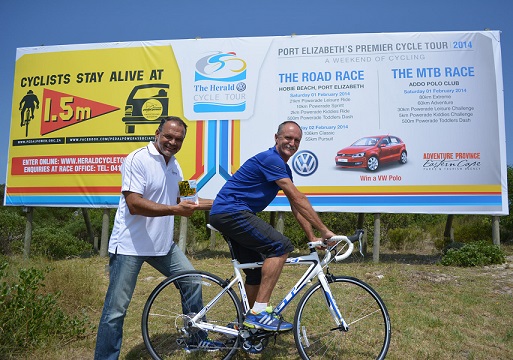 The Herald VW Cycle Tour has joined forces with the Pedal Power Association to promote “Safe Cycling” on the streets of Nelson Mandela Bay. Avid sportsmen Iqbal Sain (left) and Alan Taylor, whose company Bukani Print sponsors the marketing material for the cycling event, are seen here at the Strandfontein Road billboard.