The FNB Madibaz kicked off their Varsity Cup preparations in fine style with a convincing 68-0 win over Spring Rose Rugby Club at the NMMU Stadium in Port Elizabeth on Tuesday evening.

The university team routed the local club side in the first of four pre-season fixtures aimed at getting the squad match-fit for the high-profile national competition.

Over the next three weeks, they will face tough opposition from the SWD Eagles and Free State Cheetahs, as well as Community Cup champions Despatch.

“I think for a first time out, we got the result we wanted. We didn’t concede any points but there’s still a lot of work to do.”

Janse van Rensburg said it was positive to note that his team showed signs of improvement as the game wore on.

“So early in the pre-season, all areas can be improved upon. The guys are trying the systems under pressure.”

He said they needed to be more accurate and less reckless with their defensive systems, while focusing on retaining possession on the attack.

“In the line-outs and set pieces we need to work on the accuracy of our ball-winning so we can launch a bit better.”

After reaching the semi-finals in last year’s Varsity Cup, Janse van Rensburg said his team would be aiming high once again.

“It’s a promotion-relegation year but we can’t be thinking of that going into the competition. If we just focus week in and week out, play to our full potential and fight like hell, then I’m confident we won’t finish in the bottom two teams.”

Janse van Rensburg said the warm-up matches provided the ideal opportunity to give all members of his 45-man squad game time on the field and find the right combinations of players.

“Essentially, what we want to do is to put the things we’re working on into practice in a pressure cooker environment and make sure that the combinations are working, so that by the time we play our first game against Maties we’re picking the best group of players to put onto the field.”

At the end of the month, the squad would be whittled down to the final 23 players, he said.

“It’s definitely good conditioning to ensure that we get contact fitness and that we’re ready to come out of our straps in the first week of the competition at Varsity Cup level.”

Janse van Rensburg said the pre-season would also be a transitional phase during which he would hand over the reins to new coach David Maidza.

“David has been with us since the middle of November; he’s been coming to the sessions, checking what’s been done and giving input where required.

“We’re doing the handover in a way that is best for the team and that’s why I’ve stayed on a bit longer to ensure that the momentum we’ve gained continues.”

Janse van Rensburg said he would be taking a break from coaching to concentrate on his family life.

“I think NMMU rugby is in a far better state than what it was three years ago. The club’s a lot healthier and the player depth is a lot better.

“I have great confidence in the team. They’re a good group of players and good human beings who work very hard.”

He said home crowd support would play a crucial role in their upcoming campaign.

“It definitely lifts the team. These guys train week in and week out and sweat and put their bodies on the line.

The FNB Madibaz take on FNB Maties in their first Varsity Cup home game on February 3. 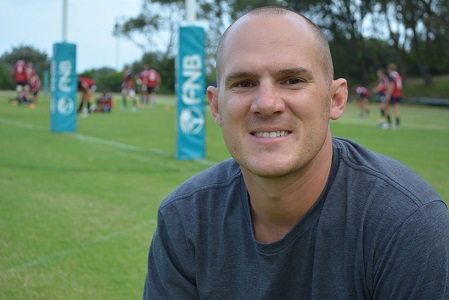 As one of his final duties, outgoing head coach Brent Janse van Rensburg is seeing the FNB Madibaz through their pre-season fixtures in preparation for the Varsity Cup competition in February.