The FNB Madibaz university team ruffled the Free State Cheetahs’ fur when they narrowly went down 29-26 to the fancied Super 15 outfit at the NMMU Stadium in Port Elizabeth on Tuesday night.

The Cheetahs’ mid-week side opened the scoring with an unconverted try and followed it up with a second to take the score to 10-0 after the first quarter.

Madibaz wing Yamkela Ngam put the home side’s first points on the board when he dotted down a few minutes later after he had kicked the ball through the Cheetahs’ defences. The try was converted by Gavin Hauptfleisch.

Michael Bernardt scored a second try for the students, converted by Hauptfleisch, shortly before the break to give them a four-point advantage (10-14) at halftime.

However, the visitors hit back soon after the break with a seven-pointer of their own to retake the lead on 17-14. The Cheetahs ran in another unconverted try to stretch their lead to 22-14.

The Madibaz were rewarded for an attacking period of play with a try by flanker André Barnard, converted by replacement flyhalf Ruan Allerston, to pull the deficit back to one point.

The Cheetahs answered with a converted try to take the score to 29-21.

An unconverted try by Chris Cloete pulled the Madibaz back to within three points and everything to play for as they went into the final three minutes.

The FNB Madibaz’ final attack went awry when they gave away a penalty in the dying moments and the ball was booted into touch by the Cheetahs on the final whistle.

Madibaz captain Roy Godfrey said the close result had boosted his men’s confidence ahead of the national Varsity Cup tournament, which starts early next month.

“I think the Cheetahs were more shocked by the result than we were because they obviously wanted to go out and smash us.

“All in all it was a good hard test and a real team effort. The guys stuck to the structure and things we’ve been working on are falling into place.”

Godfrey said there were however a few aspects of their game that still showed room for improvement.

“With two weeks to go, there are still a lot of things we can work on. So hopefully by the time we play Maties, we’ll be even better and everything will be running smoothly.”

It was the third of four warm-up fixtures for the Madibaz as they head towards the Varsity Cup.

They will take on Community Cup champions Despatch in their final pre-season friendly on January 28 before opening their Varsity Cup campaign at home against the Maties on February 3.

The match will be televised live from 4.45pm.

Entrance to all matches at the NMMU Stadium is free and spectators are advised to arrive early. 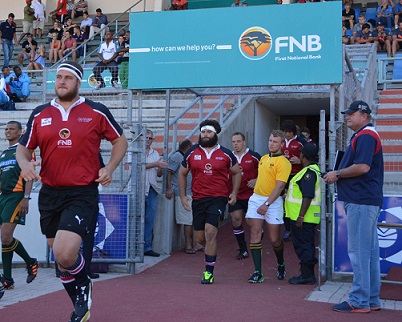 FNB Madibaz captain Roy Godfrey leads his team onto the field for Tuesday night’s clash against the Cheetahs.