Following the success of the inaugural Kowie River Mile in Port Alfred last year, SPAR Eastern Cape has announced that it will dive in as title sponsor of the event on December 29.

The retailer will wrap up its 20th anniversary celebrations in the province by expanding its footprint in open-water swimming.

The latter race, which is now known as the SPAR River Mile, has found a new home on the Sundays River just outside Port Elizabeth, while the retailer assists with anti-pollution efforts in the Swartkops River.

“Based on the success of that race, we were looking to expand our sponsorship in the region and the Kowie River Mile proved to be the perfect opportunity,” said Swart.

He said the race “ticked all the boxes” in terms of promoting healthy living and family-oriented fun in aid of a good cause.

“We would love it to become an annual highlight on the Sunshine Coast calendar.”

With the annual influx of holidaymakers to the seaside town, over 500 swimmers are expected to take part this year. This is more than twice the number for the 2012 event, which was won by Olympic open-water swimmer Jessica Roux.

Swart said proceeds from the entry fees would go to the local Sunshine Coast Hospice, which offers home-based care for terminally ill people throughout the Ndlambe municipal area.

The organisation currently serves over 300 patients from Kleinemonde to Alexandria, with palliative care provided at Settlers Hospital in Grahamstown where necessary.

Hospice fundraiser Karen Long said they were delighted to have SPAR on board as it was becoming increasingly difficult to raise funds for the organisation.

“With the inaugural race last year, we did the best we could with the money we had.

“When we saw the interest from far and wide, we knew that this had the potential to become the biggest event hospice has ever done.”

Long said the organisers quickly realised that they needed a like-minded sponsor to help grow the event.

“We needed a partner that has the same feeling as us, that we are there to look after the community. SPAR is about quality, about family, about all of those things, so it was a logical choice.”

She said there would be entertainment for the whole family on race day, including food and craft stalls, music and jumping castles for the children.

“Water safety is of course crucial, so the local NSRI has also come on board. We’ll be giving them a donation, which is what we do in this area – charities helping each other.”

The event starts at noon at the Kowie River mouth and offers a line-up of races for swimmers of all ages.

Race timing will be handled by Michael Zoetmulder of Zports Event Management, who also organises the SPAR River Mile.

The first 500 entrants will receive free t-shirts and goodie bags, with prize money and trophies for the winners. 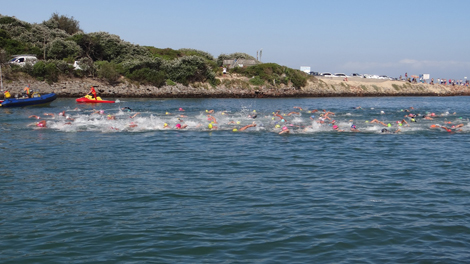 SPAR Eastern Cape has come on board with the Kowie River Mile in aid of the Sunshine Coast Hospice, which takes place in Port Alfred on December 29. Pictured here are swimmers in action during the inaugural event last year, which was won by Olympic open-water swimmer Jessica Roux.