South African marathon mountain biking champion James Reid will return to defend his title in the Ultimate Quest category at The Herald VW Cycle Tour in Nelson Mandela Bay on February 1 and 2.

Reid captured the inaugural title when he proved himself the best rider on aggregate over the 80km Extreme mountain bike challenge in Addo and the 106km Classic road race in Port Elizabeth.

The 21-year-old said he and girlfriend Candice Neethling, who won the women’s title, would once again set their sights on the R10 000 category prize purse.

“We love racing in that part of the world.

“I think it’s a fantastic contest and it will definitely grow within cycling in South Africa; I believe a lot of events will eventually follow suit with something similar.”

Reid said the pros would use the Ultimate Quest to gauge their early season form against that of their rivals on the circuit.

“It’s a great weekend of stimulation that helps you build towards other objectives later in the season. It pushes you to the limit, which is great.”

He said the category tended to favour mountain bikers, as they could create larger time gaps in the off-road event than their opponents could on the road.

“On a course like the Classic, where you come back along a coastal road, the wind keeps the bunch together and riders usually don’t finish more than three or four minutes apart.

“On the mountain bike you can have a puncture or a mechanical or a small crash and then you’ll be out there by yourself and lose 10 minutes.”

On the other hand, missing the right moves on the road could be equally costly, said Reid.

“When it comes to the big teams, the guys are fresh and they’re firing, so you’re possibly not going to win the road race but you can certainly go with the moves.

“Matthys Beukes won the mountain bike race this year but missed the key move in the road race and lost his chance overall.”

The Trek rider said he was feeling confident about the mountain bike course after finishing second in a sprint at the national cross country championships on the same trails in July.

“It’s quite technical with lots of singletrack and handmade stuff.

“When it’s built like that you have a lot of acceleration and deceleration, which suits cross country specialists like me.

“When it’s tighter and there’s a lot more technical, navigation type stuff where you’ve got to get over and through obstacles as fast as possible, it suits me more than a lot of other guys on the circuit.”

Although he suspected he might have a target on his back, Reid said he was looking forward to donning his national champion’s jersey in the Addo race.

The Capetonian showed his class when he won the queen stage in last month’s Bridge Cape Pioneer Trek alongside Belgian teammate Jen Schuermans.

He advised amateurs who are contemplating doing the Ultimate Quest to double up on their weekend training.

“You need to be able to do long, hard days back to back. The average guy should do a long, hard ride on a Saturday and follow that up with another ride on the Sunday.

“It’s that thing of getting up in the morning, being fatigued and then having to change bikes, kit and headspace to suddenly focus on the road.” 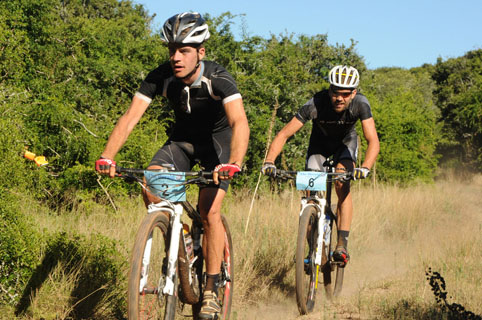 National marathon champion James Reid will return to defend his title in the Ultimate Quest category at The Herald VW Cycle Tour on February 1 and 2. Here Philip Buys (back) gives chase during this year’s event.