Port Elizabeth-based Francois Geldenhuys earned his spot at the 2014 UCI World Cycling Tour when he clinched a double victory in the Msunduzi Road Challenge just outside Pietermaritzburg last weekend.

Geldenhuys, who rides for local club Shukuma-NMMU, won the time trial in the 30-34 age category and the overall road race in the only African qualifier for the international event.

He will take part in both disciplines at the UWCT Finals, which start in Slovenia at the end of August.

Previously known as the UCI Masters Road World Championships, the competition will see the world’s best amateur riders competing for the coveted rainbow jerseys in the various age categories.

“I only found out about this qualifying event just over a month ago,” said Geldenhuys, who returned to competitive cycling in August last year after a three-year hiatus due to injury and work commitments.

“I’ve been doing a lot of mountain biking in the winter months, so I immediately went back onto the road, which is my favourite discipline, and started training specifically for the Msunduzi race.”

While mountain biking had increased his strength and power on the bike, Geldenhuys said he had had to refocus on his speed work.

“I actually just went for the road race but thought I’d do the time trial as well. I knew, having good form, I would do reasonably well and if I had a good result it would make me feel more comfortable for the road race.”

The surprise double victory gave the 30-year-old, who raced semi-professionally for the now-defunct Team Omega, the confidence boost he needed.

“I’m very confident that I can improve a lot more leading up to the worlds. Now I’ve got a year’s base behind me and I can just build on that.”

Geldenhuys, who gained his national track colours as a junior, said the time trial would be his main goal in Slovenia.

“If I train for that, it will give me good form for the road race anyway.”

He previously also represented SA in a tri-nations test against Belgium and Greece.

Geldenhuys said he was in some of the best form of his career after also winning the Stonehouse Capital Zuurberg Mountain Bike Challenge and Makro Bestmed Cycle Tour this year.

“The last three months have come together nicely. Working in the cycle industry gives you a lot of time to ride.”

He said equipment and nutrition sponsors Coimbra Cycles and Isostar had helped his performance.

“But the support from Shukuma-NMMU has been very good. They covered all my costs going up to the race this weekend and if it wasn’t for them I wouldn’t be able to get to all the bigger races.” 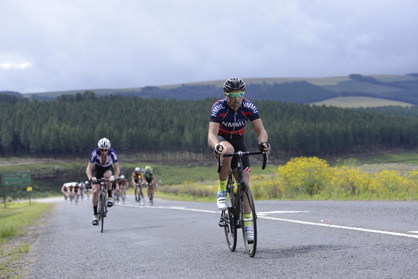 Port Elizabeth-based rider Francois Geldenhuys (Shukuma-NMMU) en route to a double victory in the Msunduzi Road Challenge just outside Pietermaritzburg last weekend. He qualified for the 2014 UCI World Cycling Tour in the process.