Hosts NMMU have emerged as strong contenders for the inaugural Varsity Netball crown after romping to a 67-22 victory over the University of Cape Town in Port Elizabeth on Monday night.

The televised match saw the SPAR-Madibaz side emerge unbeaten from the opening weekend of the six-week series, following a narrow 57-52 win over the University of Johannesburg and a convincing 51-30 victory against Stellenbosch University.

With 15 points, the Eastern Cape outfit now moves into joint first position in the overall standings alongside NWU-Pukke.

SPAR-Madibaz made the most of their home court advantage, going on the attack right from the start. Captain and goal shooter Dumisane Chauke was in devastating form as she helped her side to a 19-5 margin by the end of the first quarter.

Good defence by goalkeeper Zanele Vimbela and tight marking by the home team put UCT under pressure in the second quarter and they failed to convert a number of chances, allowing NMMU to take a 29-10 lead into half-time.

In the third quarter, the PE team’s substitute combination of shooter Kara Willemse and goal attack Elzaan Lotter took advantage of the two-minute power play to earn valuable double points, while the defence shut down any further moves from the opposition.

UCT put up a brave fight and continued to play positive netball despite trailing 49-15 going into the fourth quarter.

But, with Chauke and former Proteas centre Mampho Tsotetsi back on court, the SPAR-Madibaz outfit’s goal scoring fiesta continued.

With three minutes to go, Chauke retired with a bruised hipbone but by then it was merely a case of adding insult to injury.

UCT, who compete in the B division of the University Sport South Africa competition (USSA), were simply completely outclassed by the dominant home side.

After the match, a delighted Chauke said her team had been working very hard in preparation for the tournament.

“We just have to keep the standard high because it’s just going to keep getting tougher and harder from here.”

Vimbela, who was named FNB Player of the Match, said the defence had played an important part in the final result.

“We defended very well. I’m satisfied with our performance.”

Earlier in the evening, the nailbiting UJ-Maties game went down to the wire with the two teams matching each other point for point until the final minute.

With the score at 46-all, Maties’ on-form goal shooter Lizanne Visser scored the decisive point. UJ staged a desperate fightback in the dying seconds but Matlala Mokoko was unable to put the ball in the net, handing Maties the win.

NMMU will face UP-Tuks in the fourth round of fixtures next week. 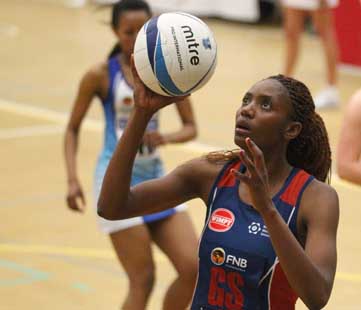 Captain Dumisane Chauke helped her SPAR-Madibaz side to a third straight victory in the inaugural Varsity Netball series when they beat UCT 67-22 at NMMU South Campus in Port Elizabeth on Monday night.