Smit, who races for the University of Pretoria and the Bonitas pro team, won four of the five stages and finished third in the final criterium.

The 20-year-old took the yellow jersey on day one and did not relinquish it again.

In the women’s race, former pro Sarah Chemaly and team-mate Kelley Hess made it a one-two for the University of Cape Town. Ashleigh Blackwell, who rides professionally for the Bestmed ASG outfit, claimed third for Stellenbosch University.

“My team rode so well. It wouldn’t have been possible without them.”

Their combined performance also helped Tuks to secure the overall victory in the team classification. Shukuma-NMMU took the runner-up spot, with the Maties squad in third.

Smit was full of praise for the Nelson Mandela Metropolitan University’s organising committee.

“The best thing about this tour was how well it was organised. Everything was perfect – the roads were nice and their route choices were brilliant.”

The newly crowned champion now turns his attention to his pro racing commitments as he prepares to compete in the Knysna Cycle Tour on Sunday.

“This time I’ll be working for somebody else but that’s the nature of cycling.”

Earlier in the week, Cape Peninsula University of Technology student Timo Cooper won the mountain biking event on a technical cross-country circuit at Hopewell Trails just outside the city. The women’s race was won by Emily Clarke of UCT. 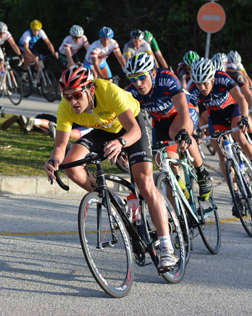