The University of Pretoria’s Willie Smit completed a hat-trick of stage wins to retain the yellow jersey on day two of the Bestmed USSA cycle tour in in a cold and rainy Port Elizabeth on Thursday.

Smit added the 120km queen stage – and the day’s sprint prime – to his tally after claiming the 83km opening road stage and 15km individual time-trial at the national student championships on Wednesday.

The Team Bonitas pro went clear of a four-man lead group in the closing kilometres to take a convincing win in 3:17:51 for an overall time of 5:46:53.

Hans-Werner Heuer of Stellenbosch University claimed the runner-up spot in 3:19:32. He was chased to the line by Shukuma-NMMU’s Marinus Prinsloo, who finished five seconds back.

Heuer and Prinsloo occupy the same positions in the general classification with aggregate times of 5:50:54 and 5:51:11 respectively.

Prinsloo also put on a powerhouse climbing display to take both King of the Mountain hotspots.

The host institution, which last won the event in 2008, now leads the team classification.

“Our main goal for the tour is to get a podium in the team classification. The individual positions are a bonus for us.”

“I didn’t do a lot of work seeing as I have the yellow jersey – all I had to do was defend it. My team did a brilliant job.”

Then, 40km into the race, the first of two demanding laps started.

“I told them to make it as hard as possible on the second lap when we hit the big 5K Hill climb and there was a small break that went on the climb. I think it was about 70km into the race.”

This effectively split the race into the lead group of four riders, which also included Adriaan Louw of the Cape Peninsula University of Technology, and a chasing bunch of 12.

As the freezing conditions and fatigue began to take their toll on the leaders, Smit, a second-year law student, launched his final attack on Marine Drive 15km from the finish at the NMMU South Campus.

“I thought it was a good time to ride away, so I did. When it’s this cold you have to eat and drink enough; today’s race was as much about nutrition as it was fitness.”

Tuks’s Elmarie de Wet took second on the day in 3:16:10, four seconds ahead of Ashleigh Blackwell from Stellenbosch University.

Overnight leader Kelley Hess of UCT drops to second in the general classification (5:32:30), while Blackwell rounds out the overall podium (5:33:15).

The three-day tour wraps up on Friday with a 2.4km hill climb in the morning followed by a criterium in the afternoon. 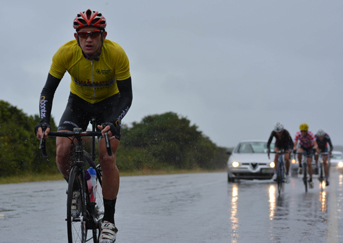