Fresh from the national marathon championships this past weekend, the cream of South Africa’s mountain bikers will line up for the third edition of the RE:CM Knysna 200 stage race, which starts on the Garden Route on Friday.

Among the 300-strong field will be top 10 championship finishers Lourens Luus and Waylon Woolcock, riding in the colours of the title sponsor, as well as Kevin Evans and Brandon Stewart of FedGroup-Itec.

“It will be my first stage race in that area, so I’m looking forward to some great riding,” said Luus, who hails from Hazyview in the Lowveld.

“Apparently it’s a real mountain biker’s route with something for everyone. Climbing, technical and scenic sections are what the route designers have in store for us.”

The Stellenbosch-based rider said his team-mate’s knowledge of the 200km route would certainly work to their advantage.

“Knowing a route is vital to winning a stage event like this one. Knowing on which sections to go hard, where to pace yourself and what lies ahead before starting is crucial for mental preparation.

“Also knowing when technical sections are approaching helps with positioning yourself in the bunch.”

The racing upfront is expected to include the Bridge pairing of Timo Cooper and Nico Pfitzenmaier, as well as Olympic gold medallist Matthew Brittain and another former SA rower Rob Dormehl.

Brittain impressed when he placed fourth, a mere three seconds behind winner Nico Bell, in the opening event of the Nissan TrailSeeker series just over a week ago.

Luus said the daily stages, at an average distance of 67km, were shorter than many other events on the calendar but that the racing would by no means be easier.

“I think, at this point in the season, it’s better as we will be ending a big racing block in Knysna and are a bit fatigued. Also, the shorter, punchier stages will make it a bit more technical and fast, which suits us both.”

The duo, who differ in age by a decade, have been on good form so far, taking the runner-up spot at the Old Mutual joBerg2c and fourth at the Nedbank sani2c after struggling with technical problems.

“I feel I have some good form at the moment, just a bit fatigued. I had a good race at SA champs but didn’t race smart enough and suffered from cramps at a very critical point.”

The 21-year-old, who is the current MTN marathon series champion, said he has had a solid introduction to stage racing this year courtesy of ex-roadie Woolcock.

“Waylon’s strength is tour riding, coming from a road background, whereas I have always focused on single-day events.

“So every ride I do with him is like going to class. This year has been a major learning curve; it has made the world of difference to have a mentor like him.”

He said the biggest adjustment for him had been the mental aspect of multi-day events.

“About 40% of your performance is related to psychological preparation and focus. Your body can take much more punishment than you think, but it takes a lot out of a person to be so focused for so long.

“If you go into a stage race and ride every day as a single-day event you are most probably not going to see the end of the tour. But you are still racing and need to be prepared to suffer day in and day out.”

The pair’s next challenge will be the final two events in the MTN national ultra marathon series, where Luus and Woolcock hope to move up the overall rankings from their current positions of fourth and sixth respectively. 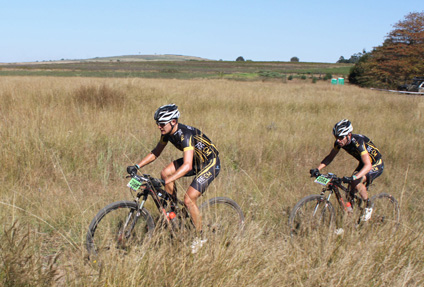 Lourens Luus (left) and Waylon Woolcock of Team RE:CM hope to continue their solid stage racing form at the three-day RE:CM Knysna 200, which starts on the Garden Route on Friday.