Brandon Stewart and Neil MacDonald strengthened their grip on the Old Mutual joBerg2c when they claimed their third stage victory on day six of the mountain bike race in KwaZulu-Natal on Wednesday.

The FedGroup-Itec riders completed the 91km stage from Kamberg to Hazeldene farm near Underberg in 3:21:00 to take a comfortable three-and-a-half minute lead after 24:02:11 of racing.

RE:CM’s Waylon Woolcock and Lourens Luus, who were unlucky to suffer technical problems in the closing kilometres of the previous stage, trailed them home in 3:23:53. Third on the day was the Bridge duo of Nico Pfitzenmaier and Timo Cooper in 3:26:09.

Woolcock and Luus remain in the runner-up spot in the general classification (24:05:38), while Pfitzenmaier and Cooper replace Cannondale-Blend’s Charles Keey and Darren Lill in third (24:20:47).

Stewart said everything had gone according to plan on the day.

The top four teams raced hard from the outset on the district roads and, after a series of accelerations on the first big ascent, Cannondale-Blend, RE:CM and Bridge started to struggle.

“We had a good ride up the climb and got a gap on the others there,” said Stewart. “We just wanted to maintain it, so we rode at our own tempo and tried to stay out of trouble and not take any risks.”

With them up ahead, the chasers worked together on the district roads to limit their losses.

After losing Cannondale-Blend at the river crossing approximately 50km into the race, it was left to RE:CM and Bridge to chase Stewart and MacDonald.

Woolcock said the ascents on the stage, which featured 2 370m of climbing, soon began to take their toll.

“On the last district road climb, Bridge just couldn’t hang on and then it was every team for itself.”

Given the time gap, he said it would be difficult to wrest the leader boards from Stewart and MacDonald.

“But the race isn’t over yet. We’ll still take our chances where we can and we’d like to take another stage win.”

According to Stewart, FedGroup-Itec’s performance so far in the 910km race was heartening, as he had been struggling with his own form recently.

“I’ve had a really difficult season and it’s felt like I’ve just been banging my head against the wall, so this is good.”

RE:CM’s mixed team of Erik and Ariane Kleinhans took another uncontested stage win and a top-10 overall finish in 3:44:37 to claim a virtually unassailable 12-minute lead in the category with their total time of 25:33:03.

Britain’s Catherine Williamson and Jarryd Haley of bizhub-Rocky Mountain were second on the day in 3:47:42 to retain the runner-up spot in the overall rankings (25:45:51). Swiss riders Jane Nüessli and Yves Corminboeuf of Fischer-BMC rounded out the daily and overall podium in 3:50:09 (26:14:07).

In the women’s race, Burry Stander Foundation’s Cherise Stander and Lise Olivier took their second stage win in 4:01:35 to move up into second place overall (27:17:18).

The joBerg2c Ladies team of Ischen Stopforth and Yolande de Villiers crossed the line second in 4:03:12 to extend their overnight lead to more than eight minutes (27:08:58).

Third-placed Yolandi du Toit and Nicci Grobler of USN-bizhub finished in 4:18:06, slipping to third in the overall standings (27:27:58).

Day seven sees the start of the well-known Nedbank sani2c route, with a fast-paced 78km stage from Underberg to MacKenzie Club near Ixopo. 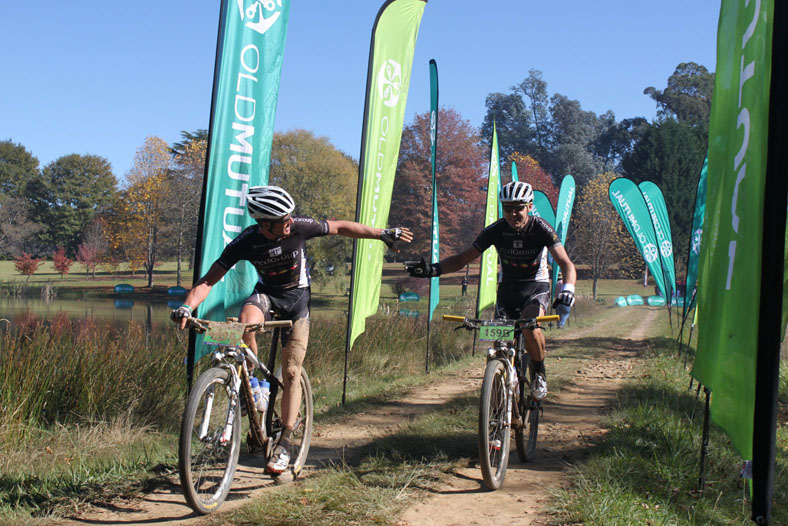