Neil MacDonald and Brandon Stewart claimed their second stage win and with it the overall lead on day five of the nine-day Old Mutual joBerg2c mountain bike race on Tuesday.

The FedGroup-Itec duo turned up the heat on the 98km stage from Winterton to Kamberg in the KwaZulu-Natal Midlands, which featured a total ascent of more than 1 500 metres.

With only RE:CM’s Waylon Woolcock and Lourens Luus able to keep pace on the final climbs, the stage looked set for a ferocious dogfight between the two teams until the overnight leaders suffered a technical setback with six kilometres to go.

This gave MacDonald and Stewart an uncontested victory in 3:30:50, with Woolcock and Luus crossing the line a minute later. Bridge riders Nico Pfitzenmaier and Timo Cooper rounded out the top three in 3:35:59.

Stage four winners Louis-Bresler Knipe and Kevin van Hoovels of Contego dropped out of contention early on due to illness but were determined to finish the stage.

The win sees MacDonald and Stewart reclaim the overall lead with an aggregate time of 20:41:11, a mere 34 seconds clear of Woolcock and Luus. Charles Keey and Darren Lill of Cannondale-Blend remain third overall on 20:47:46.

MacDonald said there were no easy stages in the 910km event and that the racing was far from over.

“I think Waylon and Lourens were just super unlucky today with the chain break because they were really strong. It’s still really, really close; just a couple of seconds in it.”

He said everything stayed together until the 40km mark, when some of the teams chose not to stop at the first waterpoint.

“That prompted the racing a bit because there some guys went up the road. Then that British combination (Tim Dunford and Ben Thomas) put in a massive effort to chase it.”

The move split the large lead bunch, with the big climbs in the Zulu Waters Nature Reserve whittling down the teams to the final selection.

“We tried to make the racing on the climbs, so we went really hard,” said MacDonald.

Just before the second waterpoint at 70km, FedGroup-Itec and RE:CM kicked into high gear on the climb.

“Coming out of the reserve, we were able to gap Darren and Charles and we tried to go as hard as we could over the top, which put us in the red a bit.

“It didn’t really pay off but at least there were only two teams in the front.”

Although the RE:CM pair lost little time in fixing the broken chain, it gave the FedGroup-Itec team the gap they needed to take the win.

“It was a really hard day and it’s only going to get harder,” said MacDonald.

They were followed home by joBerg2c Ladies Ischen Stopforth and Yolande de Villiers in 4:05:46, with overnight leaders Yolandi du Toit and Nicci Grobler of USN-bizhub third in 4:16:14.

Stopforth and De Villiers, who already have a brace of wins and the neutral first stage to their name, regained the top spot overall with a total time 23:05:46. Du Toit and Grobler slip into second (23:09:52), with Stander and Olivier rounding out the podium (23:15:43).

RE:CM’s Erik and Ariane Kleinhans kept their stranglehold on the mixed category, taking their fifth stage in a row in 3:49:10.

The 94km sixth stage rolls out from Kamberg to Underberg on Wednesday. The race finishes at Scottburgh on Sunday. 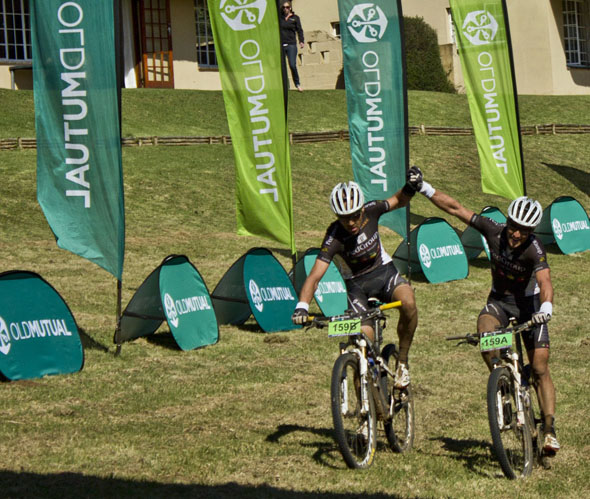