Max Knox and Nico Bell mastered slippery conditions to win the decisive second stage and take the overall lead of the Nedbank sani2c mountain bike race in KwaZulu-Natal on Friday.

After crashing early on the descent into the Umkomaas River Valley, the mud-spattered EAI-Westvaal riders powered their way back to claim the 99km stage from MacKenzie Club near Ixopo to Jolivet farm in the Highflats region.

They crossed the finish line first in 4:09:36, almost a minute-and-a-half ahead of second-placed Brandon Stewart and Neil MacDonald of FedGroup-Itec (4:11:01). Early leaders Louis-Bresler Knipe and Gert Heyns of Contego-Giant trailed them home in 4:13:23.

An on-form Bell and Knox, who are currently lying first and second in the MTN marathon series, moved from fourth to first in the overall standings with an aggregate time of 6:56:49.

Stewart and MacDonald, who were fifth in the general classification, moved into the runner-up spot for a combined time of 6:58:19, while Knipe and Heyns slipped from second to third overall in 7:00:34.

Overnight leaders Charles Keey and Darren Lill dropped out of contention completely after mechanical problems put paid to their chances.

Faced with over 2 200m of descending, Knipe and Heyns threw caution to the wind as they set a blistering pace early on and flew towards the valley floor.

By the time they reached the first waterpoint alongside the St Josephine’s bridge at the 38km mark, they had opened up an almost seven-minute lead on Bell and Knox.

A further two minutes off the pace were Lill and Keey, Stewart and MacDonald, Woolcock and Luus (RE:CM) and Kevin Evans and Gawie Combrinck (FedGroup-Itec 2).

While RE:CM and Cannondale-Blend fell back due to punctures, Stewart and MacDonald pulled clear of the remaining chasers to catch Bell and Knox on the climb out of the valley.

The two teams worked together to close the gap on the leaders and by the second water table, at 65km, Knipe and Heyns’s lead had narrowed to just three minutes.

By the final waterpoint at Highflats Church 15km later, the three leading teams were together at the front.

“Once we got to Highflats and Nico was still looking fresh I knew that maybe we wouldn’t win but we at least needed to make it hard for the other guys,” said Knox.

“Then we got a gap and made it count to the finish. Hopefully we can have a smooth run tomorrow and bring it home.”

There was an interesting tussle in the women’s race as overnight leaders Ischen Stopforth and Robyn de Groot of Biogen also encountered mechanical difficulties over the first 50km.

“It was a mudslide out there today,” said De Groot. “Ischen had chainsuck that sucked like a vampire and then her saddle dropped.”

After stopping to fix the seatpost, the two caught and passed leading ladies Catherine Williamson and Yolandi du Toit of bizhub on the valley ascent.

With an aggregate time of 8:17:54, the stage win puts Biogen more than 10 minutes clear of their bizhub rivals on the overall standings.

Williamson and Stopforth remain second in 8:28:36, with Stewart and Moore rounding out the podium in 9:18:31.

Mixed category leaders Erik and Ariane Kleinhans played it carefully in the treacherous conditions but still showed their class by taking the stage in 4:56:35 to cement a convincing overall lead (7:54:13).

They were followed home by Jeep-Felt’s Patrick Belton and his American partner Kendall Ryan in 5:10:14, with RMB Change a Life Academy’s John Ntuli and Jeannie Dreyer a further 25 seconds adrift.

“We decided not to risk anything today, especially in the mud, so we were joined by John and Jeannie,” said Erik Kleinhans.

“We rode with them for a while and then we stopped to clean our bikes. We eventually caught up to them with about 40km to go and rode together but on the climbs Ariane was a bit stronger and we pulled away.

“But they looked good out there today. It was nice to see them up front for a while.”

The final stage of the race, which is presented by Nedbank Private Wealth, will see riders crossing the Scottburgh lagoon and riding out onto the Indian Ocean on a world-first floating bridge after covering 80km from Jolivet. 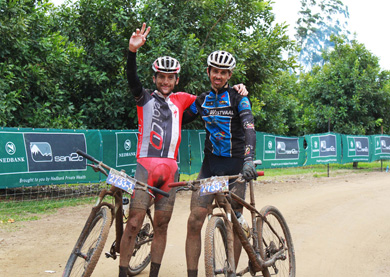 Max Knox (left) and Nico Bell of EAI-Westvaal took a surprise victory in the decisive second stage of the three-day Nedbank sani2c mountain bike race in KwaZulu-Natal on Friday.