After a run of bad luck this season, Charles Keey and Darren Lill finally got the break they needed to claim the opening stage of the three-day Nedbank sani2c mountain bike race near Ixopo in KwaZulu-Natal on Thursday.

The Cannondale-Blend duo timed it perfectly to hold off all contenders in a bunch sprint to the finish, taking the 87km stage from Underberg to MacKenzie Club in 2:47:10.

They were followed home a second later by runners-up Waylon Woolcock and Lourens Luus of RE:CM, with Louis-Bresler Knipe and Gert Heyns of Contego-Giant a further second adrift.

“It’s really nice for Charles and I because we’ve both been sick and had a bad run at Epic and joBerg2c, so this win has been a long time coming,” said Lill.

He said the presence of at least half a dozen strong teams upfront had made the racing a lot more tactical and the pace had varied accordingly.

“It was a lot more like a road race, actually,” said the former national road champion.

According to his team-mate Keey, who finished second last year alongside James Reid, the racing had split on the Oak Maze dual track within the first 12km.

“It regrouped a bit after that and then we went into another bit of single track through the trees.”

Climbing out of that section, the decisive move came on the tough View Climb – the highest point on the event.

The top six teams – including Max Knox and Nico Bell (EIA-Westvaal), Brandon Stewart and Neil MacDonald (FedGroup-Itec), and Andrew Hill and Leeroy Emslie (TIB) – shook off the chasers as they powered up the ascent.

They stayed together over the PG Bison floating bridge at the 30km mark and through both waterpoints, with Keey taking the lead into the final uphill drag to the finish.

“We were positioned fairly well. Charles hit out at the right time, just as the hill crested, and kept it going all the way to the line,” said Lill.

“I was just following the right wheels and I could see by the time we got to this grass finish that we were going to take it.”

In the women’s race, the stage victory went to Ischen Stopforth and Olympic road racer Robyn de Groot, riding in the colours of Biogen, in 3:07:45.

They came home almost two minutes ahead of Stopforth’s former bizhub partner Catherine Williamson – with whom she won last year – and Yolandi du Toit in 3:09:37. FedGroup-Itec’s Bridgette Stewart and Jackie Moore finished a distant third in 3:36:55.

De Groot, competing in her maiden Nedbank sani2c, said it was great to be riding with the seasoned Stopforth but that their lead was far from secure. “A minute or two isn’t much in mountain biking.”

On Friday, the gruelling 99km second stage from Ixopo to Jolivet farm near Highflats features a spectacular descent into the Umkomaas River Valley and 2 288m of climbing.

The race, which is presented by Nedbank Private Wealth, wraps up with a world-first floating bridge finish into the sea at Scottburgh’s main beach on Saturday. 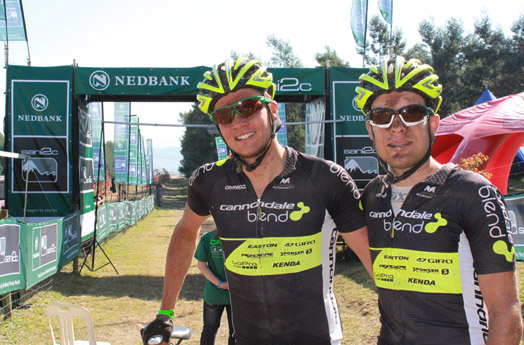 Cannondale-Blend’s Charles Keey (left) and Darren Lill claimed the opening stage of the three-day Nedbank sani2c at MacKenzie Club near Ixopo in KwaZulu-Natal on Thursday.