Day seven proved to be the lucky number for Louis-Bresler Knipe and Kevin van Hoovels when they took their second stage win in the Old Mutual joBerg2c mountain bike race in KwaZulu-Natal on Thursday.

The Contego riders, who are both cross-country specialists, came to the fore on a fast and technical 78km stage from Hazeldene farm near Underberg to MacKenzie Club in the vicinity of Ixopo.

They outsprinted race leaders Brandon Stewart and Neil MacDonald of FedGroup-Itec to take a four-second victory in 2:59:15, with RE:CM’s Waylon Woolcock and Lourens Luus a further second off the pace.

The overall podium remains unchanged, with Stewart and MacDonald (27:01:30) still three-and-a-half minutes ahead of second-placed Woolcock and Luus (27:04:58), with Bridge riders Nico Pfitzenmaier and Timo Cooper in third (27:29:06)

Their stage win sees Contego move up five places to 13th in the general classification (29:16:43).

Belgian Van Hoovels, who had been battling illness since their win on day four, recovered well to drive the racing upfront from the start on an undulating stretch of district road.

“I kept the pace high because I don’t like the fast-slow-fast riding; it hurts my legs,” said Van Hoovels. “I’m not 100% yet but good enough for the win today.”

Knipe said his team-mate, who finished in the top 20 at the Olympic Games last year, had made it hard for everyone including himself.

“Kevin was definitely the strongest rider again today. He’d be off the back fiddling with something, then he’d come from the back, pass the bunch, go sit up front and still pace.”

Coming out of the Oak Dual Track section 12km into the stage, the three lead teams hit the first big ascent of the day.

“It was a long drag of a climb and the pace was extremely high – it was maximum effort,” said Knipe.

“Kevin was just sitting up front and making the pace hard. Lourens was having a hard time and so was Brandon.

“They both dropped off a bit on that climb and then I knew we had a chance at this because we’d had an easier day the day before.”

The three teams gritted their teeth and rode together, with the Contego duo leading the way across the PG Bison floating bridge across the Mossbank Dam at the 30km mark.

Despite fatigue setting in, the leaders kept a flat-out pace and stayed together all the way, resulting in a three-team sprint on the short uphill climb to the finish.

Knipe, who finished third overall with David Morison last year, said he was looking forward to the descent into the Umkomaas River Valley on day eight.

“There are also a few long climbs, so it’ll be interesting to see what happens. Tomorrow you can either make a lot of time or lose it.”

“We don’t really have anything to lose now. We’re out of the GC but we have the stage wins in our sights.”

Erik and Ariane Kleinhans of RE:CM put in another commanding performance to take their seventh straight stage win in the mixed category in 3:11:26 (28:44:29).

Fischer-BMC’s Swiss pairing of Jane Nüessli and Yves Corminboeuf followed a distant second on the day in 3:17:14, with Antonia Wipfli and Patrick Jauch of Team Gisler third in 3:19:58.

The Kleinhans duo now hold a more than 22-minute lead over runners-up Catherine Williamson and Jarryd Haley of bizhub-Rocky Mountain (29:06:51), while Wipfli and Jauch lie third on aggregate (29:31:21).

“It’s very, very tight racing. The other teams are very strong, which is great because it pushes you to another level,” said Ariane.

“At Epic, we could take it easier on the downhills and open up the gaps on the climbs but here the competition’s much more intense.”

This cements an almost 15-and-a-half minute advantage over second-placed Cherise Stander and Lise Olivier of the Burry Stander Foundation, who also finished second on the stage in 3:32:37 (30:49:55). 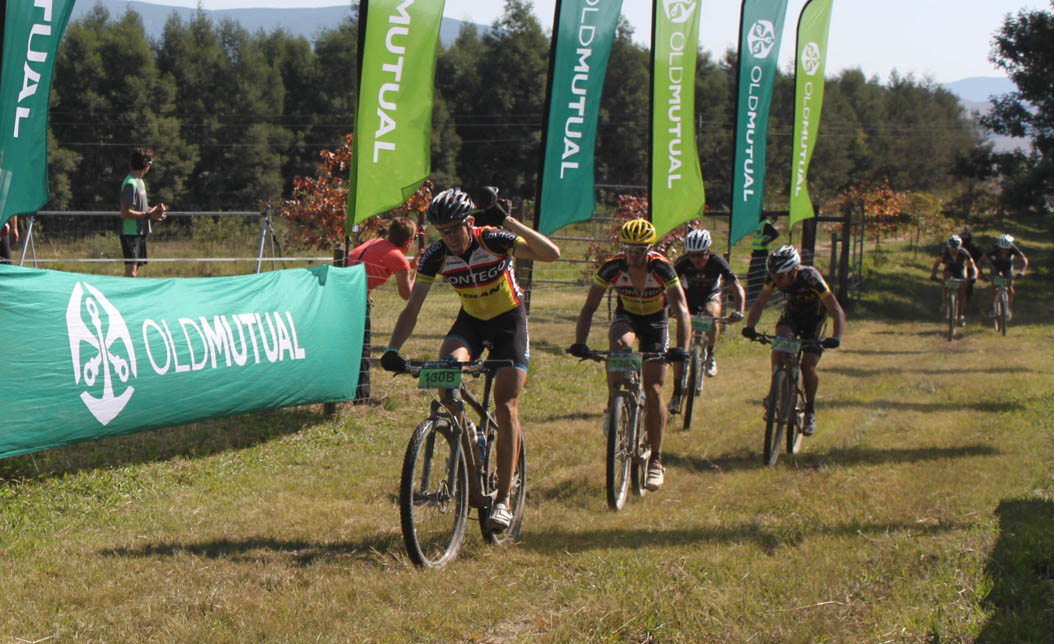 Belgium’s Kevin van Hoovels (left) and his Contego team-mate Louis-Bresler Knipe (second from left) celebrate as they sprint to a second stage win on day seven of the Old Mutual joBerg2c mountain bike race on Thursday.