The RE:CM riders claimed victory on the gruelling 130km queen stage between Reitz and Sterkfontein Dam near Harrismith in the Free State in 4:34:02.

They were followed home by overnight leaders Brandon Stewart and Neil MacDonald (FedGroup-Itec) in 4:34:25, with Charles Keey and Darren Lill (Cannondale-Blend) third in 4:34:40.

After going into the stage with a one-second deficit, Woolcock and Luus now move into the top spot overall with an aggregate time of 12:23:22.

Stewart and MacDonald slip into second with a combined time of 12:23:44, while Keey and Lill remain on the bottom step of the podium in 12:24:04.

With the most challenging mountain stages still ahead, Woolcock said their negligible margin meant he and Luus could not rest on their laurels as race leaders.

“Thirty seconds or so means nothing when you’ve still got six stages to go.”

With the long haul in mind, the day’s racing started at an easy pace on the district roads outside Reitz. A large lead bunch of around 30 riders rolled together all the way to the third waterpoint at the 96km mark.

“Then things hotted up when FedGroup-Itec decided not to stop,” said Woolcock, who was running out of water after losing a bottle earlier in the stage.

He and Luus pushed on as the five top teams – including Contego’s Louis Bresler-Knipe with team-mate Kevin van Hoovels and Bridge’s Timo Cooper and Nico Pfitzenmaier – broke away from the chasing bunch.

On the new Mount Paul single track section 100km into the stage, the Contego and Bridge riders were dropped, leaving just FedGroup-Itec, RE:CM and Cannondale-Blend to battle it out for position.

“Lourens and Brandon got away on the Red Bull Run in the final 15 kilometres, leaving myself, Neil and Cannondale-Blend,” said Woolcock.

“Neil and I knew we had to get across to our team-mates up ahead, so it was just full gas from there.”

Woolcock attacked his former team-mate on the final climb and, with MacDonald unable to follow, surged ahead to pass Stewart and join new team-mate Luus as they charged towards the finish.

The Stellenbosch-based pair said although they had intended on taking things easier, they had taken full advantage of the opportunities that had come their way.

“To get the win by spending a few pennies in the last five kilometres was really worth it,” said the 31-year-old Woolcock.

“Tomorrow is just another day and we’ll just take it as if we’re not leading and race it that way.”

According to Luus, 21, the 910km race was one of their major goals for the season.

“We’ve been training hard towards this. It’s still early in the tour – the secret now is to recover well and stay as fresh as possible.”

RE:CM also dominated the mixed category with Erik and Ariane Kleinhans taking their second stage win in 4:47:55, a full two minutes ahead of Catherine Williamson and Jarryd Haley of bizhub-Rocky Mountain.

Swiss riders Jane Nüessli and Yves Corminboeuf of Fischer-BMC had a tough day in the saddle, finishing a further 10 minutes back in 4:59:55.

The Kleinhans duo extended their overnight lead to sit on an aggregate time of 12:50:31. Williamson and Haley moved up to second overall (12:52:54) with Nüessli and Corminboeuf dropping to third (13:01:59).

The first of the climbing stages starts on Monday with a 125km ride from Sterkfontein Dam to Winterton in KwaZulu-Natal. The nine-day race finishes at Scottburgh on May 4. 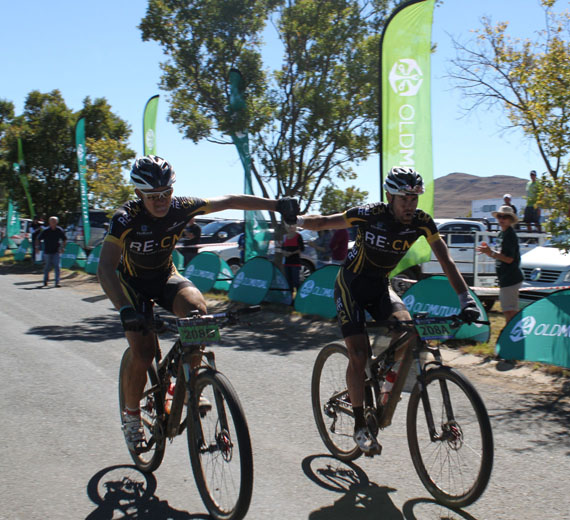