Written for Legends of the Pedal

Pehr Gotthard Bernhard Hansen may not be a name you’d instantly recognise, but his Hansom bicycle brand you certainly will.

One of the more “senior” Legends of the Pedal, 78-year-old Gotty – as he is better known – has certainly earned his status.

Aside from building much-celebrated bicycles, he also rode them, counting national tandem champion and two Paarl Boxing Day 25-mile titles among his many achievements.

Additionally, the Kempton Park resident has been an administrator of the sport for more than half a century. He was the last president of the South African Cycling Federation and steered it into its current incarnation as Cycling South Africa.

And if that wasn’t enough, he continues to referee races today. “I loved cycling, I still do,” he says fervently.

“My bike’s still standing in my kitchen and, every time I walk past it, it starts shivering just in case I’m going to climb on it.”

“I didn’t know what to do – the guy said I must just put my head down and ride. So I did and won the one-mile handicap by 70 yards.”

When the Eastern Province U19 rugby player’s legs collapsed beneath him, he realised that cycling “wasn’t for babies or beginners”.

“The difference between rugby, where you have to train once or twice a week, and cycling, where you train six or seven times, was just unbelievable. If I had known what I was in for I would never have gotten on a bike!”

As an 18-year-old punched card accounting specialist, Gotty moved to Cape Town, where he would become a life member of the Bellville Cycling Club.

“Under Western Province, I won everything from the quarter-mile to the 100-mile events. I was more a track cyclist but proved that I could do well on road too.”

At 21, Gotty married Bonnie, with whom he had five daughters and lived happily for 57 years until she passed away five years ago.

Then came 1959, which was a watershed year in his cycling career. Gotty claimed the SA tandem track title with Les Haupt as well as what he describes as “the biggest and nicest win of my career”, the Paarl Boxing Day race, which he’d take again six years later.

“There were eight to ten thousand people around the stadium in Paarl. You couldn’t hear yourself think and the atmosphere was like winning the world title,” he recalls.

In another professional turning point that year, Gotty’s employers made the decision not to move with the times and computerise their systems as per his suggestion. “So my skills essentially became redundant.”

A year later he opened a factory with new partner Etienne Somorjai and Hansom Bicycles was born, although they would not trade under that brand until 1984.

“I had the contract to build Peugeot in South Africa. I had never held a brazing torch or even a paint gun in my life, so had to learn everything from scratch.”

Gotty says he was not shy to sweep the floor and even built his own spray booths and tanks. He developed a longstanding relationship with British supplier Reynolds Tubing, which was at the forefront of steel alloy frame technology.

Starting with their original lightweight 501 and 531 ranges, he kept pace with their technologies and became the first local producer accredited to build a 753.

What set his highly prized bicycles apart, he believes, is that they were handmade and custom built for every rider.

“It’s not about the bike – it’s about the guy on the bike. And to have a hand in every one that leaves the factory is really special.”

A few years later, Gotty sold half the business back to Peugeot but continued building for the French company at factories in Germiston and eventually Babelegi, just north of Pretoria. At that stage, they were building 50 bikes a day.

“Peugeot sold their franchise to Western Flyer in about ‘79 but I was contracted to build their prestige range for them. Then in ‘84 Western Flyer decided they were going to do it on their own.

“And that’s when we brought the name Hansom back onto the market.”

Gotty says almost every one of SA’s top cyclists – from Alan van Heerden to Wayne Pheiffer and Chris Willemse – rode their products.

The company is equally well known for sponsoring the now-defunct Hansom Tour, which grew exponentially from a two to four to six-day event.

“They used to say you don’t enter for it, you get called up. It was a very difficult tour.

“It was far more difficult than the Rapport Tours. I was involved in all 25 of those, so I would know.”

The Hansom factory finally closed down in the late 1990s due to competition from imported products and Gotty retired.

All the while though, he had devoted his free time to the administrative side of the sport.

Gotty started out as Western Province secretary and then chairman, eventually becoming a national selector in 1967.

“I took my first team overseas that year to the Tour de Juergen, which was then the biggest junior race in the world, and we came seventh out of 25 nations.”

Two years later he managed the senior Springbok team in a series against Australia. After that, South Africa was isolated from international sport but, says Gotty, remained world class.

“In 1982, Switzerland broke the embargo and sent their best team out to South Africa to ride a track series. I was fortunate enough to manage the SA team.

“We put them away in all three tests even though they had two world record holders and two world champions in their team. Two years later, we beat an international invitational team as well.”

As South Africa shifted towards democracy in 1992, England invited the country to take part in the Milk race, so Gotty took the team over.

But for him personally, the standout tour came in 2001. “We had our first invitation from China, which had just opened its doors to the western world.

“The tour went from China to Tibet and we travelled over a pass that was higher than the base station of Everest. Riders, managers, everyone had to pass the medical.”

Having reached the literal high point of his administrative career, and now at the helm of CSA, Gotty turned his attentions to his presidential duties before passing the mantle to Laurence Whitaker in 2006.

Today, the grandfather of nine and great-granddad of “quite a few” remains hopeful for the future of South African cycling and is delighted to see young talent coming through the ranks. However, he believes government and cycling authorities should ensure that the youngsters’ education and development becomes a priority.

“Not everybody makes it to the top and when they come to the end of their careers, they have nothing behind them, they can’t find a decent job and they’re essentially looking for parking.”

And coming from a man who was fortunate enough to spend the better part of six decades involved in all facets of the sport, that’s advice worth heeding. 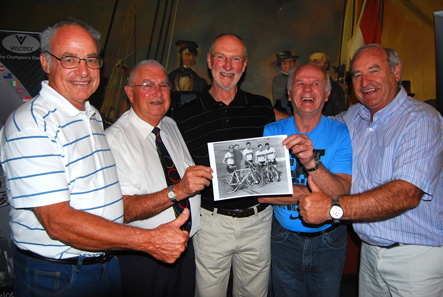