Port Elizabeth pro cyclist John Lee Augustyn, who made his mark in the mountains of the Tour de France, said he was looking forward to the route changes in the 28th edition of The Herald VW Cycle Tour on February 3.

“I think the new climbs will definitely raise the standards and make the racing a little bit harder,” said Augustyn.

“This is good for the pros from a racing perspective and a fresh challenge for the average rider.”

The major alteration to the 106km Classic course, which still starts and finishes at Hobie Beach on the PE beachfront, will be the omission of Kragga Kamma Road and the inclusion of the venomous Slanghoogte climb.

The latter will now host the first king of the mountains hotspot (36.4km) while the second is still at Maitlands (59km). The sprints remain unchanged on Buffelsfontein Road (10km) and at Altona Primary (43km).

The former U23 national road champion said the short but steep Slanghoogte ascent, which is reached after climbing the gradual lower slopes of the 5km Seaview hill, would present a very real breakaway opportunity.

“Maitlands now becomes a climb on which a small group could consolidate their lead instead of trying to get away,” said Augustyn.

“It gives them a chance to stay clear and foil the sprinters, so that’s pretty interesting. I think it’s going to mix things up a bit.”

The 26-year-old felt the race now offered something for climbers like him, while still rewarding sprinters willing to do the hard yards.

He expected pro teams to send down a mix of climbers and sprinters as the route now gave them an alternative hand to play.

For the average rider, Augustyn’s advice is to get fitter than in previous years.

“If you mix a bit of climbing in with your training and spin an easy gear, you’ll definitely still be able to have a nice ride.

“The good thing is that all the climbs are in the first half. And then hopefully there’ll be a westerly wind to push you back home.”

Augustyn, who took the year off to recover from hip surgery following an injury sustained during the Tour of Poland a few years ago, said he anticipated 2013 being his comeback year.

One of only two South Africans to have competed in all three European grand tours, Augustyn said he had been contacted by several parties and was considering his future options.

The Herald’s chief marketing officer Justin Peel said this would only be the second route change after a minor tweak in 1989.

“Aside from the racing aspect, Slanghoogte gives spectators the perfect spot to camp out for the day.”

Peel said organisers had also created an Ultimate Quest category for riders who would like to participate in both the road and mountain bike feature races.

“It’s a challenge to cyclists all over the country to race the 80km Extreme on the Saturday and the 106km Classic the next day.”

He said riders’ combined times would reveal the strongest overall cyclist in the men’s and women’s categories with R5 000 going to each.

The organisers have also introduced the new 55km Pursuit to replace the 70km and 40km road races.

Another change is the addition of a 10km “sprint” for 10 to 12 year olds on the Saturday to complement the existing 21km, 2km and 500m Powerade-sponsored events.

The overall prize purse of R114 000 makes it the richest race in the Eastern Cape and one lucky entrant will drive away in a Volkswagen Polo 1.4 Trendline.

Visit www.heraldcycletour.co.za to enter or to view route maps and profiles. 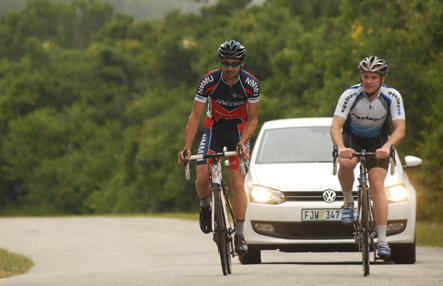