The event, which showcased the vibrant summer ranges from the centre’s fashion retailers, was attended by hundreds of shoppers and saw titleholders from age seven to 21 selected in four categories.

The announcement of popular senior winners Anelisa Willem and Anda Bongoza by stylish MC Msikeleli Moli was met with shrieks of delight by the excited crowd.

A poised and articulate Willem, from KwaZakhele in Port Elizabeth, said she was thrilled to have won.

The 20-year-old store manager and part-time financial management student said being Miss Pier 14 would provide the perfect vehicle for gaining exposure for her community work with the Ithubalethu Youth Development Programme.

“There are so many things that I want to do. I want to inspire the youth, so they say, ‘Look what Anelisa is doing, I can do it too’.”

Bongoza, 19, of North End, said he was very surprised and excited to be the new face of Pier 14.

“My mother saw the competition in the PE Express and she phoned me and told me about it. So I entered but I didn’t expect to win.”

The Andrew Rabie High School learner was mobbed by a small crowd of female fans after the show. “Some of them are family,” he laughed.

According to Sophia Steyn of centre management, this was the third edition of the popular competition. “It was a great success – definitely the best we’ve had so far.”

Steyn said she was looking forward to working with the new brand ambassadors. “We’re definitely going to involve them in our promotions and charitable initiatives going forward.” 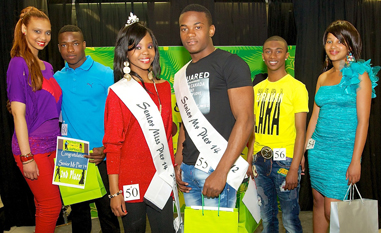