The University of Johannesburg has signalled its intent to enter the footballing big leagues with the signing of former Bafana Bafana defender Bradley Carnell as head coach this week.

Carnell will guide the UJ men’s team in their quest to win the SAFA promotional league as well as qualify for the Varsity Sports tournament and University Sport South Africa club championships.

The university gained promotion to the SAFA league by winning the Mayfair Local Football Association League this season and is currently top of the log.

The former German Bundesliga player said he had always known that UJ was “a sleeping giant” and that he was looking forward to giving back to the sport that had given him an 18-year international career.

“I’ve been so fortunate to be involved in the world’s biggest sporting code. Football teaches you so many things on and off the field, so it’s only natural to hand down some of the ‘tricks of the trade’.

“Even at an amateur level you should strive to be the best. Creating a competitive team with confidence, self-belief, discipline and structure are key factors of my approach.”

Carnell said he was excited to be mentoring talents like Itumeleng Mogotsi, Ruben de Freitas and Lerato Tleane, and that recruiting top student athletes was essential in rebuilding the team.

“Building up the right structure is the key to long-term success. Being prepared for bigger and better things down the line, especially the Varsity Sports tournament, really creates a lot of excitement on campus.

“This should be on every student’s agenda if they are active footballers and are looking to step up to the next level. To build a competitive team in a year or two would be a great achievement and a challenge I’m looking forward to.”

Carnell, who became one of South Africa’s youngest professional footballers at age 16, said his gamble had paid off but that education should remain the number one priority.

“Only a small percentage of amateur players turn professional and people often underestimate how difficult it is to make it.”

According to UJ’s senior manager of sports clubs Adrian Carter, Carnell shared the university’s vision in this regard.

“The University of Johannesburg is and always will be a student-focused organisation. The intention is to put sustainable structures and processes in place to significantly raise the profile and standard of football.”

Besides his technical knowledge and wealth of experience, Carter said Carnell commanded a healthy respect from players that would be instrumental in bringing about a cultural change off the field.

He said Carnell had a great name in the soccer fraternity and had also been exposed to many quality structures during his career. “It is this experience combined with the type of person he is that will undoubtedly herald a bright new future for UJ football.”

Carter said Carnell would be assisted by Bafana Bafana and FC Porto stalwart Mandla Zwane for the remainder of the season.

Since retiring from his last club, Supersport United, a year ago, Carnell has been involved as an ambassador for development initiatives such as the Dettol Shona Khona project and the Boots for Dreams Foundation. He is also resident football analyst for Supersport. 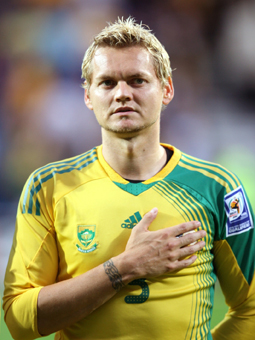