Defending champion Matthys Beukes capped off quite a year when he and ad hoc partner Renay Groustra claimed victory in the three-day Contego Wines2Whales mountain bike race, powered by Maserati, in November.

The RSAweb-CangoMTB.com pair beat 600 teams in the 209km race from Lourensford Wine Estate in Somerset West to Onrus just outside Hermanus.

“I think Wines2Whales is one of my favourite races and the stages suit me well,” says Beukes, who won the 2011 event with Dominic Calitz. “It’s short and it hurts but I love it.”

The win bookends a great season for the young rider, which began with a victory in the Attakwas Extreme Challenge near his hometown of Oudtshoorn in January.

“That was a funny race,” he says. “I thought I could win but didn’t peak for it, so Attakwas wasn’t a big goal. But somehow on the day I just had the legs.”

It was a different story at Wines2Whales: coming off the back of the Bridge Cape Pioneer Trek, where he took three stage wins and the king of the mountains title en route to second place overall, his legs failed him on day one.

“I was totally spent; it was definitely the worst I’ve blown this year. But I knew that the engine was fired up and we could make our move on stage two.”

Beukes says he just tried to keep up with cross-country specialist Groustra and the two were happy to eventually limit their losses to a mere 10 seconds on the opening day.

“On stage two, everything worked out as we thought it would. I was feeling good and did the damage early on and then Renay took us home with some impressive speed.

“On day three our plan was to ride with the leaders until the finish and keep out of danger. We did just that and were very happy to have won our final race for 2012!”

Beukes, who won the national elite cross-country series in 2010, also podiumed in two major stage races in the United States this season.

The 24-year-old took second overall and a stage win in the Transylvania Epic and followed it up with third place and two stage victories in the Breck Epic.

While there, he also participated in XC races including the Windham World Cup and an East Coast Series race, as well as national and state championship events.

“I went to the US to try and land an international sponsor so I was there on my own budget, living in a tent and out of the back of a car for three months. It was unreal – by far the best experience of my life!”

Despite a lack of sponsorship and a string of mechanical problems, Beukes says he loved every moment and is already looking forward to next season’s racing and his new business venture.

“Now to open my bike park (Cango Mountain Biking) and get this show on the road for 2013!” 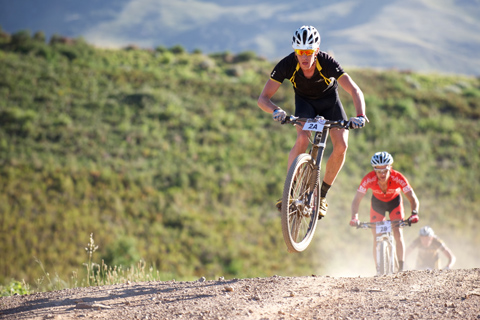 Matthys Beukes gets airborne ahead of team-mate Renay Groustra.