Title sponsor RE-CM has upped the ante by offering almost R100 000 worth of prizes in next year’s Knysna 200 mountain bike race, for which entries opened this week.

The third edition of the three-stage race, which takes place along the Garden Route from June 7, now offers a R45 000 prize purse for the winners.

In addition RE-CM, an asset management company, will be giving away unit trusts to the value of R50 000 in a raffle, with proceeds from ticket sales going to race’s charity of choice.

According to race organiser Patric Mosterd, the increased investment will go a long way towards making the 200km event one of the most prestigious and sought-after on the mountain biking calendar.

“This is about proper mountain biking and awesome single track. The pros can race it in the red from beginning to end but it’s also a great experience for first-time stage racers.”

Last year’s event was won by Louis Bresler-Knipe and Jaco Venter of Team Contego-28E, while the bizhub-FCF pairing of Yolandi du Toit and Leana de Jager took the women’s title.

Mosterd said the field would be strictly limited to 300 riders, across the solo and team categories, in order to retain the overall quality of the event.

“What makes the race so special is that the daily stages start with the best riding in the forest – there’s no junk miles getting to the trails.”

He said the 74km first stage, featuring 1 540m of ascent, would roll out from the Knysna Elephant Park, pass through lush Wittedrift farms and follow the old railway line to the lagoonside finish.

“The highlight on day one must be riding ‘Parks se Pad’, which is the Holy Grail of all mountain bike routes in the area. The RE-CM Knysna 200 is the only event to traverse this beautiful stretch of indigenous forest.”

The 68km second stage, which climbs 1 250m, starts in Rheenendal and takes riders through the “no-go” sections of the Garden Route National Park.

“This is elephant territory and riding this section of the Outeniqua Trail is the experience of a lifetime.”

Views of the Knysna Heads and Outeniqua Mountains await at the top of Ratelkop before riders plunge into the indigenous forests and take on the final descent down Phantom Pass.

The fast and flat 60km third stage begins on the Harkerville Red Route and makes its way along the cliffs between Plettenberg Bay and Harkerville before descending into Knysna.

All stages terminate at the Thesen Island Harbour Town race village, where there will be daily live entertainment and fully catered lunches and dinners served by Tapas Bistro.

“This is a fantastic corporate team building opportunity and a chance to impress important like-minded clients. An outdoors working weekend doesn’t get better than this!”

Mosterd said, unlike this year’s event, there would be no “Lite” version of the race in 2013.

For those looking for even more of a challenge, he said the Rocky Mountain Garden Route 300, which runs from February 22 to 24, would be the ideal choice.

“Approximately 80% of the field use it as prep for the Absa Cape Epic. As a result of its timing, the 300 also attracts many foreign teams, who are always so impressed with their experience here.”

Mosterd said the organisers were already looking forward to their next event, the 170km Moon to Noon, on October 26.

“It’s a completely novel and exciting approach to night racing. Participants head out at midnight, cross the Outeniqua Mountains and ride into the early hours of the morning.”

Enter any of these events at www.gardenrouteevents.co.za. 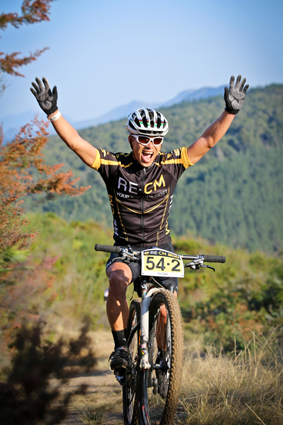