SPAR Eastern Cape has reconfirmed its commitment to the development of local women’s sport by extending its sponsorship of the SPAR-NMMU Netball Club for a further three years.

This follows the latter’s recognition as Sports Club of the Year at the prestigious Nelson Mandela Metropolitan University Achiever Awards last week.

The club won the provincial netball league for a seventh consecutive year with several players and management representing South Africa at international level.

According to SPAR promotions and advertising manager Wendy Westraadt, they enjoyed a mutually beneficial relationship with the club and were very proud of its achievements.

“The players and staff have worked very hard and thoroughly deserve it.”

NMMU sports manager Theresa le Roux said the award was made on a points system based on club results, player achievements and involvement in community outreach programmes.

“The trophy is highly prized because it takes into account all the efforts that a club has put in during the year.”

Le Roux said they were particularly proud of wing defender Zanele Mdodana, who captained the Proteas to a gold medal in the Diamond League Series in August.

In July, goalkeeper Zanele Vimbela was called up to the SA student team that took silver at the World University Netball Championships. She was also named Player of the Year at the Nelson Mandela Bay Netball Association awards ceremony on Friday.

On the management side, head coach Lana Krige was appointed coach of the national Fastnet team.

“All of a sudden some of your national players would like to study at NMMU or are looking for jobs in PE!”

Le Roux said 80% of the players selected for the NMBNA provincial teams were from the university, but that they would not have been able to achieve their goals without the retailer’s backing.

“Not only has it enabled us to assist many from previously disadvantaged areas, it has also given our players opportunities to take part in areas of the sport ranging from coaching to umpiring and scoring clinics.”

Le Roux said presenting development clinics at schools throughout the province had also given them the opportunity to identify and groom future talent for the university.

Go to www.facebook.com/sparinaction to keep abreast of SPAR’s initiatives in the Eastern Cape. 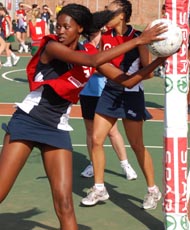