With their first two races already full, organisers of the FedGroup Berg & Bush are giving mountain bikers another opportunity to experience one of the top multistage races in the country.

The addition of the inaugural three-day Great Trek to the seventh running of the event now gives prospective entrants three options, which also include the three-day Descent and the two-day “original” Berg & Bush.

The Great Trek, which starts on October 30 near Sterkfontein Dam in the Free State before plunging down the escarpment into the valleys of KwaZulu-Natal, follows the same route as the popular Descent.

Participants will once again cover the historical heartland of the province as they trace the wagon route over the Drakensberg Mountains taken by the Voortrekkers in 1837.

Race organiser Gary Green said he had created the Great Trek in order to give more individual riders and two-man teams the chance to step back in time.

“The area is rich in Anglo-Boer War history, which adds something really special to the race,” he said. “Riders summit Spioenkop, for example, which was the scene of a significant battle.”

Green said he started the original Berg & Bush in 2006 with just 56 riders, before adding the Descent due to popular demand in 2009.

The latter was named the country’s top event in its first year and its prize money attracts some of the country’s top pro riders. Last year’s event was won by Brandon Stewart and Jacques Rossouw of FedGroup-Itec Connect.

The Descent gets underway on October 26 and finishes 220km later at Winterton Country Club in the Central Berg. The 110km two-dayer, for the more social rider, starts on November 3.

According to Green, the routes are varied every year in order to meet the demands of the adventure-seeking mountain biker.

“Although entries for the Great Trek close at the end of September, the response has been fantastic with more than half of the slots already taken up.”

He said the community played an important role in the event, with all 13 seconding tables and the overnight stop at Emseni Camp on the Tugela River run by local charities.

“This year, our main fundraising focus is on protecting the 28 rhino within the Spioenkop Game Reserve from poachers. We ride through this area and the goal is to significantly improve the damaged fencing.”

To enter the Great Trek, go to www.bergandbush.co.za or find the race on www.facebook.com/bergandbush and @bergandbush. 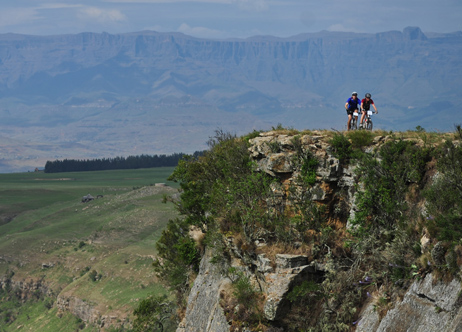