Brandon Stewart turned on the afterburners to claim his maiden victory in the Kia Walkerville Mountain Bike Classic, presented by ASG, in sub-zero conditions in Johannesburg on Sunday.

The FedGroup-Itec Connect pro, from Hilton in KwaZulu-Natal, made an early break in the 60km main event and was later joined by RE:CM’s Waylon Woolcock.

They matched each other all the way to the Walkerville Showgrounds, where the 15th edition of Gauteng’s largest and coldest winter race finished on the slippery speedway circuit.

The latter’s team-mate, Neil MacDonald, completed the podium in 2:02:02.

Stewart said the shale surface, which is designed for motorbikes to slide on, had made the final stretch particularly challenging and exciting. “It was almost like a mini Paris-Roubaix finish.”

The win rounded off a successful weekend for the 31-year-old, who also took third in the Nissan TrailSeeker Series race in Cullinan on Saturday.

“It’s always fantastic to win, especially when the event is backed by one of our team sponsors,” said Stewart.

“Obviously, Walkerville was my big focus but I think it was good for me to do the Cullinan race because it loosened me up a bit.”

He said he felt his form was good enough to make an early break on the big Platberg climb, which came after just 10km of pedalling.

“Neil and Waylon were always going to be my strongest competition, so I thought I’d give it a go while everyone’s legs were still feeling a bit cold.”

The gamble paid off and Stewart opened a gap on the chasing group. “Then I was on my own and I just carried on making the race really hard.”

However, some confusion over route markings saw him lose valuable time and Woolcock managed to close the gap just before the halfway mark.

MacDonald, riding alone in extremely windy conditions, was about five minutes off the pace at this point.

“So then it was just the two of us who worked together for the rest of the way,” said Stewart.

“It had that big climb in the beginning, some tricky rocky downhill sections, nice sparse single track, open sections and a bit of tar.”

Walkerville was the first of five mountain bike races in the new Kia series. The next is the Kia Val de Vie Classic near Paarl on September 15. 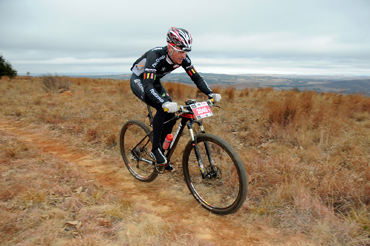