South Africa’s top mountain bikers will launch the second half of their season at the 15th annual Kia Walkerville Classic, presented by ASG, on Sunday.

In the absence of last year’s winner Max Knox and runner-up Philip Buys, whose respective European and Olympics commitments will see them on the sidelines, Gauteng’s biggest race is set to crown a new champion.

“It’s definitely an important race for us,” said former national cross-country champion Stewart. “Organisers are expecting 1 500 riders, which is a fantastic turnout for a winter event.”

He said the title sponsor was also his team transport partner and therefore a win was key for the team.

“Last year, I was recovering from illness and it was the first time I’d done it. Now that I know the course, I should fare better.”

Stewart said the 60km route, which is punctuated by three climbs, was relatively fast and flat, with good single-track sections, and he expected “tight and close” racing.

He said the lead bunch would probably separate from the field on the initial 3km climb up Platberg, which is just seven kilometres into the race. “You’ve just got to give it all you’ve got on that first climb.”

He did not foresee any of the favourites attempting to get away there. “With another 40-odd kilometres to go, it is extremely unlikely.”

The 31-year-old from Hilton in KwaZulu-Natal said the chances of a breakaway on the gradual Wattle Alley ascent, midway through the race, were also slim. “If you’re out on your own, it’s easy for the bunch to haul you back.”

Stewart said the main contenders would, in all likelihood, leave their main assault for the final 1.5km uphill drag to the finish at the Walkerville Showgrounds. “If you’re still strong there you can make it really hard in the final stretch and force a split or long sprint.”

According to him, the race was neither a climber nor sprinter’s course. “I can see an all-round, powerful rider doing really well here.”

He said he was looking forward to getting in some good speed work ahead of the national cross-country championships in Nelspruit the following weekend.

Organiser Wynand de Villiers, from ASG Events, said the race would include family entertainment such as an aerobatics display and all finishers would receive a commemorative medal.

Online entries have closed, but late entries will be accepted during registration.

This will take place at Cycle Lab Fourways from 10am to 4pm on Friday and at the Walkerville Showgrounds from 9am to 3pm on Saturday and 7am to 8.45am on Sunday. 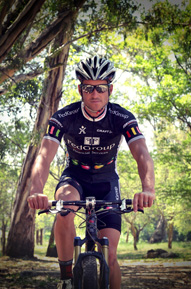