Unswerving Mervyn remains undeterred however and has vowed to be back once again to ride what is widely regarded as South Africa’s toughest one-day stage race.

The 154km BESTmed Jock Cycle Classique, presented by ASG on Saturday, July 21, is also one of the country’s oldest road cycling events.

Its three stages play out on a triangular course on the rolling roads of the Mpumalanga Lowveld – from Barberton to Nelspruit (42km), Nelspruit to Kaapmuiden (58.8km) and back to Barberton (54km).

“The reason I do the Jock every year is that it makes me train through the winter,” says Mervyn. “I’m up at four o’clock every morning to get the legs turning before work but I obviously go out later on Saturdays and Sundays.”

Although the climbs are challenging, he says the event is within reach of the average social rider like himself.

“But in saying that, you need to commit yourself; you need to know that you’re doing 150km in one day and it’s going to be tough and hot.”

The 60-year-old has seen the race in all its permutations – from the original three-stager to the all-in-one format.

“Now it’s gone back to the three-stage situation, which is great. In one shot, it was just too hard.”

He recalls the popularity of the early events, when it was virtually impossible to get accommodation in the area. “Then times got tough, the race suffered and the numbers dwindled.

“Now the situation has reversed once again and you have to book in January to ride the race in July.”

Mervyn attributes the resurgence to the new race organisers. “Since Wynand de Villiers has taken over the organisation, food and support have been incredible.

“This race was falling apart but Wynand came along and sorted it out big time.”

As fellow organiser of the Carnival City Macsteel National Classic for the past two decades, he knows what he is talking about.

“I know what organisers go through trying to keep the cyclists happy. I’m just glad that someone has got it back on track.”

After all these years, the Germiston Wheelers rider vividly remembers his first outing in the race.

“It was tough hey. I remember telling my mates after the first stage, ‘This is me, I’m finished here, I’m climbing in the car’.

“They actually threw me out and said, ‘You’re going to ride this’. I rode the second stage and tried to get back in the car again.

“Then I did the third stage and I was probably the last one but I finished.”

At the end of the day, he says, it is the camaraderie of the event that pulled him through. “The serious guys are there to compete while the rest of us just aim to finish.”

Last year’s winner Dylan Girdlestone of Team Westvaal BMC is currently riding overseas, leaving the field wide open for a new champion in the 29th edition of the race.

Pre-race registration takes place at the start venue, Coronation Park in Barberton, from 2pm to 7pm on the Friday. 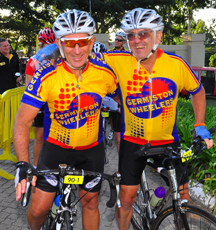