Participants in this year’s sani2c, which was presented by BoE Private Clients, will have the first bite at the cherry when entries for the 2013 edition open at noon on Monday, July 2.

Organiser Glen Haw said the initial online entry procedure for the largest paired mountain bike stage race in the world would not be the rush-based method implemented for the most recent edition.

He said successful applicants would have until the end of the month to enter and pay in full, at which time their entry would be confirmed.

“If a team decides to split, they will lose their slot and the remaining member will be placed on the waiting list,” said Haw.

“Should there still be entries available on August 1, they will be offered to those on the waiting list. Thereafter entries will open to the public.”

He said they would be strictly applying the cut-off of 650 teams for each of the three events (Race, Adventure and Trail), which means not everyone who rode this year is guaranteed an entry.

“Unfortunately, we have to be very strict. Over the years we have found this to be the magic number.

“Anything more puts us under pressure, especially in the race villages.”

The three-day, 250km race through southern KwaZulu-Natal gets underway with the Trail in Underberg on May 14. The Adventure departs on May 15 and the Race the following day.

Haw said an estimated 380 riders had completed every sani2c since its inception in 2005.

Having started with just 492 participants, the event has grown incrementally with the addition of the Adventure in 2008 and the Trail in 2012.

He said the latest incarnation had proved to be very successful. “The three events went extremely well and things generally ran smoothly.

“The few problems we had were caused by excessive numbers. Solving this is simple – we just need to learn to say we are full and not be influenced by riders desperate to get into the event.”

Despite a waiting list of over 5 000 for this year’s race, Haw said organisers were not considering adding a fourth segment at this stage.

He attributed the popularity to a number of factors, but primarily the challenging yet rideable route. “The more experienced you are the faster you’ll ride it and with speed comes technicality.”

Haw said riders could expect some surprises along the way, but especially at the finish.

“Historically, sani2c has led the way in terms of innovations. We’ve introduced floating and curved bridges as well as dual track.”

While some might call it “over-prepared”, he said organisers would once again deliver a route manicured to perfection.

“Not only does this offer a great, safe riding experience, it also gives us the opportunity to employ locals along the route.” 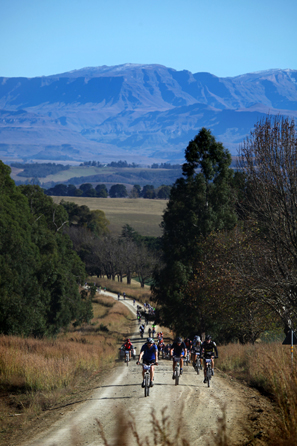