After seven days of racing, the Old Mutual joBerg2c is coming down to a two-horse race between defending champions Neil McDonald and Waylon Woolcock of RE:CM and overall leaders Kevin Evans and David George of Nedbank 360Life.

On Thursday, Evans and George notched up their fourth stage victory as they outsprinted Woolcock and MacDonald after 86km of racing between Hazeldene Farm near Underberg and McKenzie Club in the Ixopo region of KwaZulu-Natal.

The Nedbank 360Life outfit completed the stage in 2:53:19, five seconds ahead of RE:CM, who had moved into second place in the general classification the previous day.

The Itec Connect-Vodacom pairing of David Morison and Louis Bresler Knipe were also in the mix but slipped off the pace to finish 14 seconds adrift.

“I suppose we all knew that it would come down to a sprint up that nasty climb to the finish,” said Evans.

“Neil was probably the strongest but went a little too early and Waylon came over him too hard while he was trying to recover, which gave us the win.”

A big lead bunch reached the start of the Oak Lane dual single track after 20km, where the top three teams split off the front.

“Dave and I were half-wheeling each other on the tracks,” said Evans. “Then we came out and it was the usual hard pull out of there.

“When we looked back it was just the two other teams and us.”

RE:CM and Nedbank 360Life dropped Itec Connect-Vodacom shortly afterwards and built up a lead of around 40 seconds by the time they reached the floating bridge after 31km.

Morison and Knipe then took full advantage of the leaders’ refuelling stop at the first waterpoint after 38km to make up lost ground. They opted not to stop and were briefly able to latch onto the two leading teams before being detached for a second time.

They fell back by 30 seconds but rallied gamely to close the gap again by the final waterpoint.

“Louis and Dave rode really well to catch us after about 60km and then it was just the three teams to sprint it out. It was very close in the end.”

Evans, a four-time BOE sani2c winner, said he felt at home on the last three days of the Old Mutual joBerg2c, which traced the popular three-stager’s route.

“Tomorrow suits us and we’ve won sani2c on that stage before but getting there with 800km in the legs is a different story.

“We keep thinking it’s only six-and-a-half hours of racing left but anything can happen so we won’t take anything for granted just yet.”

He said their strategy would be to race conservatively and consolidate their almost nine-minute lead. “I’d really like one of those little tractor trophies for my mantelpiece.

“I think we would also like to donate one more wheelchair but the RE:CM guys are strong and if it comes down to a flat sprint tomorrow I think we’re going to battle a little.”

In the women’s race, bizhub-FCF’s Ischen Stopforth and her British partner Catherine Williamson once again swept to victory, in 3:24:01, ahead of the Itec Connect-Vodacom team of Sarah van Heerden and Jackie Church, who were nine minutes behind.

Williamson said they were still determined to ride aggressively even though they were not under serious pressure given their seemingly unassailable lead of around 83 minutes.

“I think the main thing is just to get safely through the next two days. Tomorrow’s a really enjoyable stage and you want to get a good position in the single track.”

Taking their sixth straight win in as many racing stages, mixed category leaders Erik and Ariane Kleinhans of Contego 28E sailed home in 3:10:33, just less than a minute ahead of Johan Labuschagne and Yolande de Villiers of Cycle Lab KTM.

Day seven saw no change among the overall leaders in the three main categories.

Friday’s penultimate stage covers 96km from McKenzie Club to Jolivet Farm in the Highflats region, a ride famous for its unique crossing of the Umkomaas River on a semi-suspended floating bridge.

The third edition of the Old Mutual joBerg2c finishes at Scottburgh on the KwaZulu-Natal South Coast on Saturday. 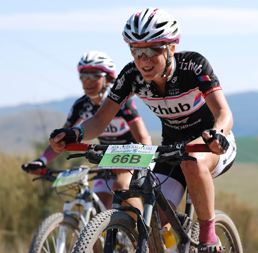