Kevin Evans and David George of Nedbank 360Life enjoyed a bittersweet triumph on the penultimate day of the Old Mutual joBerg2c as they dedicated their fifth stage win on Friday to the memory of friend and former national rider Juan van Heerden.

“He was a talented cyclist and a good guy who battled depression for years,” said George. “We wanted to celebrate his life with a win.”

The Nedbank 360Life riders consolidated their overall lead, which now stands at 17 minutes, on the 99km eighth stage from McKenzie Club near Ixopo to Jolivet Farm in the Highflats region of KwaZulu-Natal.

They clinched the Umkomaas River Valley leg, which traces the second day of the well-known BOE sani2c route, in a time of 3:48:07 to finish more than eight minutes clear of RE:CM’s Neil MacDonald and Waylon Woolcock, who crossed the line in 3:56:30.

The stage eight podium finishers lead the overall standings in the same order.

George said the top teams had started the day at a flying pace on a 7km stretch of district road before heading into the first technical section.

”We tried to get into the single track first but then Kevin dropped his chain, so he was stuck a couple of places back and I had to wait for him.”

With the problem solved, the two made up time to catch and pass frontrunners MacDonald and Woolcock on the descent into the valley. “Neil was alright but I could see Waylon was battling a bit behind him.

“Obviously as soon as Kev and I got past, we gassed it down the rest of the descent towards the floating bridge.

“I think we had gained enough time by the first waterpoint (at around 40km) to demotivate the chase.”

Having lost his partner due to illness, solo rider Brandon Stewart of FedGroup-Itec Connect sat on as the Nedbank 360Life duo opened up a two-minute gap on the chasing group that included Woolcock and MacDonald, Morison and Knipe and the Transact pair of Paul Cordes and Arno du Toit.

By the time the leaders stopped to refuel at the second waterpoint after 62km, they were seven minutes ahead of RE:CM’s defending champs. Morison and Knipe were a further 90 seconds adrift with Cordes and Du Toit also losing ground.

Nedbank 360Life maintained their lead through waterpoint three and continued to push the pace through the Sappi plantations to take line honours at Jolivet.

George said they had achieved much more than they had expected to in their first outing at the event, which included pledging a wheelchair per stage win to the Cycling for Mobility initiative.

“With prize-money on each stage, we obviously would like to seal overall victory with another win.”

However, he acknowledged that anything could happen on the closing leg towards Scottburgh. “It’s never a done deal but our margin for error is obviously a lot better now.”

According to MacDonald, he and Woolcock had done their utmost but the leaders had shown they were strongest on the day. “I think the Epic’s taking its toll on us now but we’re still happy with our second overall and stage victory.”

Rampant bizhub-FCF riders Ischen Stopforth and Catherine Williamson remained in complete control of the women’s race as they took the win in 4:46:07, once again ahead of Sarah van Heerden and Jackie Church of Itec Connect-Vodacom.

Having built up comfortable margins on the general standings, the respective category leaders are also expected to claim the overall honours when the 910km race wraps up with a swift 75km stage to Scottburgh on Saturday. 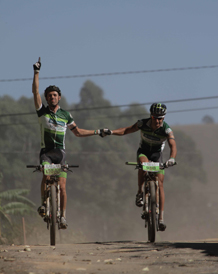