Kevin Evans and David George had more than winning on their minds as they extended their already comfortable overall lead to almost nine minutes on day six of the nine-day Old Mutual joBerg2c on Wednesday.

The Nedbank 360Life riders were racing for a greater purpose as they sealed their third stage victory in 3:17:13 on the gruelling 94km route from Glengarry resort in the Kamberg district to Hazeldene Farm near Underberg.

They were followed home by RE:CM’s stage five winners Neil MacDonald and Waylon Woolcock in 3:21:08, while the Itec Connect-Vodacom team of David Morison and Louis Bresler Knipe took the final podium spot in 3:29:45.

Evans and George claimed the R10 000 prize money and made good on their promise to donate a wheelchair per stage win to the Cycling for Mobility cause.

“We wanted to give away another wheelchair so we weren’t going to mess around with it today,” said Evans.

“My boss just said to think about the kids who would love to ride a bike and can’t because they are confined to a wheelchair – or don’t even have one. That makes you dig a little deeper.”

It was a bittersweet day for him as he helped one of these disabled children but missed his daughter Ruby’s first day at school.

With the FedGroup-Itec Connect team of Brandon Stewart and Jacques Rossouw slipping from third to ninth overall due to Rossouw’s illness, Evans said only the defending champions RE:CM now posed a serious threat.

“But it seems they’re also happy to give a bit of money away to charity, so if they want to work and take another stage win, we won’t object.”

According to Evans, day six’s challenging mix of district roads and nearly 2 000 metres of climbing had suited him and George. “We’d marked it off as a stage that we could win.”

The day’s racing started out with all the top teams present in the big lead bunch.

As the first of the big climbs approached, Evans and his team-mate set a hard tempo, with only the RE:CM riders able to follow.

George launched a second attack after the 30km mark on the long ascent up Snow Top Mountain, which at 1 850m is the highest point on the 910km race route.

They built a lead of almost two minutes but MacDonald and Woolcock, accompanied by Transact’s Nico Bell and Stewart riding solo, gained time on the 12km descent to narrow the gap to 50 seconds by the time they reached the river crossing at the bottom.

However, at the 60km mark, the leaders showed their skill once again on the next rocky climb, the ominously named Death Valley Road, and increased their lead to just under two minutes.

“We looked back on the last climb to check if they were coming but I think by that time the elastic had snapped and the guys had probably just decided to race for second and third.”

The four-time BOE sani2c champion said he was looking forward to riding the next three stages, which cover the same route.

“Knowing the next couple of days, the riding really suits us. Tomorrow ends in a bit of an uphill drag, so if there’s a sprint it could be good for us.”

There was some excitement in the mixed category as Johan Labuschagne and Yolande de Villiers of Cycle Lab KTM made an early break, but they were eventually hauled in by overall leaders Erik and Ariane Kleinhans of Contego 28E.

Bizhub-FCF’s Ischen Stopforth and Catherine Williamson had a tough stage but still took the win in the women’s category in 4:14:00, ahead of Itec Connect-Vodacom’s Sarah van Heerden and Jackie Church, who finished in 4:27:08.

The men’s, ladies’ and mixed teams who podiumed on day six occupy the same positions on the overall standings.

The 86km seventh stage takes participants from Underberg to the MacKenzie Country Club near Ixopo. 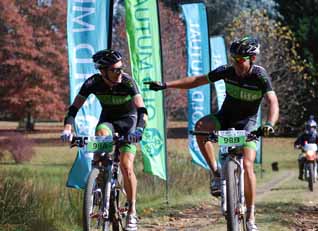