Defending champions Neil MacDonald and Waylon Woolcock proved they were well and truly in the mix as they chalked up their first stage win to move into second overall on day five of the Old Mutual joBerg2c on Tuesday.

The 102km stage from Winterton to Kamberg in the KwaZulu-Natal Midlands ended in a thrilling sprint finale against overall leaders Kevin Evans and David George.

RE:CM stopped the clock on 3:34:21, two seconds ahead of Nedbank 360 Life and almost five minutes quicker than the 3:39:13 of Brandon Stewart and Jacques Rossouw of Fedgroup-Itec Connect, who started the day in second.

MacDonald and Woolcock’s speed over the final metres was reminiscent of their showing in last year’s race when they won six of the eight racing stages in a similar manner.

It also shows what might have been had MacDonald not suffered mechanical problems in sight of the finish on stage three when the same two teams were in contention.

MacDonald said their knowledge of the course had given them an advantage over first-time entrants Evans and George at the end.

“We knew that if we took the single track from the front there would be a good chance that they wouldn’t be able to come over us.”

According to Woolcock, racing had started at a steady pace as the teams recovered from yesterday’s gruelling climbing stage between Sterkfontein Dam and Winterton.

“Then Kevin and David started putting on the gas on the climbs, which whittled down the bunch.”

Aggressive ascending saw the top three teams splinter off the front and at the base of the steep hill up to waterpoint two Rossouw was next to falter.

This forced Stewart to fall back to his partner in the chasing group, which also comprised Kamau and Gichuru and Morison and Knipe.

The FedGroup Itec-Connect duo soon left their companions behind as they tried to preserve their second place in the general classification, but, despite their best efforts, the gap ballooned to over four minutes.

Woolcock said Evans and George made one last push on the final climb and were able to establish a small lead. “We caught them in the forest and were left to make the pace for the last 30 kilometres as we needed to gain time over Stewart and Rossouw.”

The former road rider said he and his partner had been pleasantly surprised by how well they were climbing and were looking forward to stage six, which would offer similar terrain.

Mixed category leaders Erik and Ariane Kleinhans of Contego 28E maintained their stranglehold on the race by winning the stage in 3:59:11, a little over five minutes ahead of Johan Labuschagne and Yolande de Villiers of Cycle Lab KTM.

The bizhub-FCF pairing of Ischen Stopforth and Brit Catherine Williamson continued to be unchallenged as they added their fourth stage victory in 4:13:13. The Itec Connect-Vodacom combination of Sarah van Heerden and Jackie Church were second in 4:28:31.

Stage six covers 94km between Glengarry resort in Kamberg and Hazeldean farm in the Underberg region. 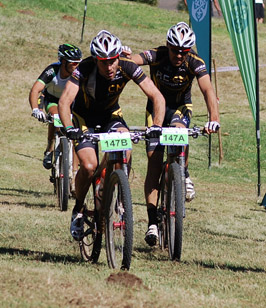 Defending champs Waylon Woolcock and Neil MacDonald of RE:CM take their first stage win on day five of the Old Mutual joBerg2c, which played out over 102km from Winterton to Kamberg in the KwaZulu-Natal Midlands. Photo: Full Stop Communications