Old cyclists never die, they just use lower gears, or so the saying goes.

Whoever said this has not been privileged to attend the annual gathering of South Africa’s Legends of the Pedal. Lunching with them is a wild ride and this “peloton of pensioners” shows no sign of slowing down.

The brainchild of SABC’s Pedal Talk presenter Johnny Koen and producer Carina Grobler, the event celebrates the history and traditions of the sport by honouring its heroes of the past.

The city was a fitting venue for the fifth such outing because, as Koen noted, it was the scene of SA’s first cycle race in 1881.

Some of its famous sons – such as seven-time national sprint champion Willie Marx, multiple SA track champion Martin Nefdt and legendary bicycle builder Gotty Hansen – were in attendance, alongside relative “youngsters” like Koen himself and vets world champion Wayne Pheiffer.

“We started with ‘Legends’ in 2007,” said Koen. “I think it’s worked fantastically and the PE event is possibly the biggest and best gathering of cycling talent ever in South Africa.”

With the group having bid farewell to the late Rapport Tour winner Alan van Heerden and Olympic time-trial bronze medallist Jimmy Swift in 2009, there are currently 37 living legends.

Although the survivors may have lost a few hairs and gained a few pounds, their energy levels have not dropped and they relived their youthful exploits to raucous laughter.

“It’s the first time we’ve let the media in, because we tell all kinds of stories. This could be damning for those of us whose wives are married,” quipped Koen.

As to the credibility of their stories, legendary cycling commentator Basil Cohen reminded everyone that “at our age, when it comes to the facts and figures, you add GST and VAT”.

With 2012 being an Olympic year, the function was decorated according to theme and the highlight was undoubtedly the address by venerable Olympian Tommy Shardelow.

Koen described the 80-year-old guest of honour as “the most successful South African sportsperson until Penny Heyns”.

In 1947, the six-time SA sprint champion won his first national title before going on to set the 400-metre world record two years later. He broke two more world records en route to scoring a pair of silver medals at the 1952 Helsinki Olympics and followed these up with a bronze at the 1954 Empire Games in Canada.

Perhaps his greatest accolades, however, came from his fellow cyclists.

On hearing Shardelow’s impressive credentials, Nefdt admitted that he was grateful for the ignorance of youth when he competed against the greying master at the 1968 national championships. “I would have sh*t myself, knowing I was riding against the great Tommy Shardelow.”

Marx also lauded his sportsmanship, saying he was a true gentleman. “This guy never made anyone look bad. If he beat you, he did it by just enough to beat you.”

But Cohen summed it up best when he described Shardelow as a fantastic ambassador for the sport. “Besides being a great bike rider, he’s a really wonderful person and we can all take a leaf out of his book.”

By preserving the legends of cycling, it is Koen’s greatest hope that future champions will do just that. 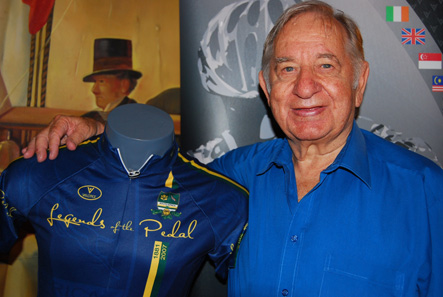 Tommy Shardelow – “That’s how life goes, I suppose. I always say I’ve got a hell of a lot of luck but it’s all bad.” Photo: Full Stop Communications