Top South African sprinter Arran Brown is set to test his form ahead of the international racing season at The Herald VW Cycle Tour in Port Elizabeth on Sunday (February 5).

The Team MTN-Qhubeka rider, who finished last year on a high note with his second victory in the Momentum 94.7 Cycle Challenge, said he was hoping to start the season with yet another national classic to his name.

“I’ve won a lot of the bigger races and this is another coastal race that I’d like to add to my list of wins.”

Fresh from his base training, Brown was cautiously optimistic about his chances. “At the moment my training is going really well and we’re laying the groundwork for a good season.

“I’ll line up on the day to win the race, but whether or not I’ve got top form like I did at the end of last year is questionable.”

The Joburg rider said the 105km Classic’s relatively fast course suited him and would provide a benchmark from which to gauge his current condition.

The former Pick n Pay Cape Argus Cycle Tour winner said that although it was still early days, he believed he had the depth to win the race. His plan was to peak from mid-March onwards in time for his European racing commitments in France and Germany.

Brown said his main opposition would come from Tasol-GT’s Nolan Hoffman, who won the event in 2006 and 2009. “He hasn’t really taken a break as he’s been training for the track World Cup events, so he’s got quite a bit of speed and should be good.”

While Team Nedbank 360Life’s Kevin Evans and David George made a strong showing at the KwaZulu-Natal provincial road championships two weeks ago in their preparation for the Absa Cape Epic, Brown said he believed the race would go to a sprinter.

“Kevin and David are two strong riders to look out for but a longer route with a lot more climbing would’ve suited them better. The nature of the course favours a faster rider, like me or Nolan.”

He said he was looking forward to his third outing in the country’s second oldest national classic.

“When I think of last year, it was very hard in the beginning with all those farm roads and lots of tight rights and lefts. It makes for some very interesting racing.”

Brown said the PE wind always had an influence on the race. “In such conditions, we can look to race quite aggressively. It doesn’t necessarily have to come down to a bunch sprint for us.”

Team MTN-Qhubeka, which chalked up 82 wins in 2011, will be hoping for a double victory on the weekend as the squad will be split between this race and the Emperor’s Palace Cycle Classic in Johannesburg.

“I’m coming down with two of my trusty team-mates, Martin Wesemann and Dennis van Niekerk. Martin helped me win the 94.7 and Dennis is a really good little climber, so we’re covered if there’s a breakaway on some of the climbs.”

Also in the team are JC Nel and new additions Songezo Jim and Calvin Benecke. “It will be good to mix things up and get to know each other early in the season.” 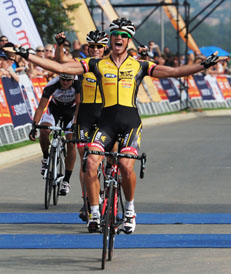 Team MTN-Qhubeka’s prolific sprinter Arran Brown is aiming for yet another victory in a national classic when he lines up at The Herald VW Cycle Tour in Port Elizabeth on Sunday, February 5. Photo: Supplied