Armed with an international advertising degree and a slew of awards from a top American university, South African track and field star Simoné du Toit has returned home to help put the University of Johannesburg’s sporting elite in the spotlight.

Last year put the seal on four remarkable years for the discus and shot put specialist, which saw her named sportswoman of the year and most valuable athlete at Southern Methodist University in Dallas, Texas.

She qualified for the 2011 IAAF World Championships in Daegu, South Korea, with a personal best heave of 17.49 metres.

She represented her institution’s student-athletes before high-profile committees of the American Athletics Federation and the university’s board of trustees, and dined with former United States president George W. Bush and his wife Laura, who is an alumna of SMU.

“I realised I had to market myself and my country positively. They don’t see you just as an individual but rather as representing something bigger than yourself.”

On the academic front, the 23-year-old achiever also found time to graduate with a diploma in human rights in addition to her bachelor’s degree.

According to Du Toit, she had initially turned down a number of international scholarships but decided to accept the SMU one after falling ill on a trip through Africa in 2008 and missing her chance to qualify for the Olympic Games.

“In hindsight, it was a very good decision to go over and study marketing from an American perspective, experience sport on a very competitive circuit and work in the field.”

Du Toit said the knowledge and experience she had gained working with the SMU marketing department and alumni association would stand her in good stead in her new communications role at UJ Sport.

“The scale of American university events and the promotions around them is just massive. You can’t compare it with anything here; not even a Bulls against Lions Currie Cup game is that big.”

The Kempton Park-based athlete said her time overseas had made her able to see the “gaps” and opportunities for making a difference in her home country.

“I’ve come back because of my family and all the possibilities that this country holds. More specifically, I want to promote UJ as one of the top sports institutions in the country.”

Having represented SA at a dozen international track and field competitions – including five world championships – Du Toit said she had achieved what she wanted to and would not be competing at the highest level for the foreseeable future.

She was instead looking forward to spending time with loved ones and raising the profile of UJ’s top-performing sportspeople. “It’s great to have the weight of the university behind me.” 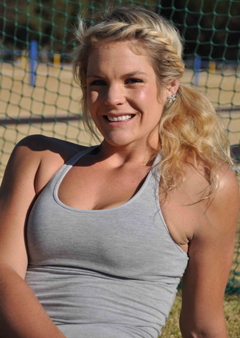 Fresh from four years in the United States, top South African track and field star Simoné du Toit will use her sports marketing skills to put the University of Johannesburg’s top-performing athletes in the spotlight. Photo: UJ Sport