The new Old Mutual Berg2c starts on April 30, four days into the main event, and picks up the existing route from Sterkfontein Dam in the eastern Free State to Scottburgh on the KwaZulu-Natal coast.

It covers 577 kilometres of some of the country’s most pristine mountain biking territory at a moderate elevation of 10 119 metres.

Organiser Craig Wapnick said there had been a strong demand for an event of this length as it was more challenging than the average three-day race but more accessible than the full Old Mutual joBerg2c.

“The nine-day race remains the ultimate journey as riders cross the whole country and all its different terrains. But this is an amazing opportunity to get a sense of what the joBerg2c is all about.”

According to Wapnick, the new option would be a good intermediate choice for riders who were perhaps not fit enough or could not afford “nine days out of the system”.

He advised those that were intent on racing competitively to rather enter the main event as the six-day version would be more of a full-service ride than a race. “However, all participants will still receive official times.”

Wapnick cautioned riders not to ease up on their training simply because the event was more relaxed in nature. “Don’t be fooled, it’s still going to be quite a ride.”

He said participants could look forward to some technical sections and massive climbs from the very first day as they headed over the mountain passes into KwaZulu-Natal.

The route would then traverse the central and southern Drakensberg from Winterton to Kamberg before linking up with the world-renowned BOE sani2c course for the final three-day stretch between Underberg and Scottburgh.

Wapnick said entries were available for two-person teams but a limited number of solo entries would also be accepted. “Although Berg2c riders will be absorbed into the main race, the overall field will still be limited to retain the event’s personal atmosphere.”

Catch SuperCycling on SuperSport 2 at 7pm on Tuesday for more details. Entries open at 8pm, directly after the show. 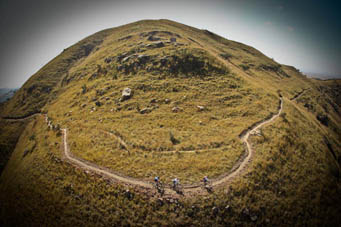