Volkswagen Group South Africa has confirmed it will drive one of the Eastern Cape’s most popular family lifestyle events, The Herald VW Cycle Tour, for the seventh year running.

The announcement comes on the back of a record-breaking production year for the Uitenhage-based vehicle manufacturer.

Speaking at the launch of the 27th edition of the event, VWSA general manager of communications Matt Gennrich said the company was once again proud to be associated with the race.

“It’s a very successful and well-organised event that has stature in the cycling and wider community.”

Gennrich said there was a definite logic to the sponsorship because “cycling is a sport that has broad appeal, as do our cars.”

The country’s second oldest national classic, which takes place in Nelson Mandela Bay on February 4 and 5 next year, traditionally marks the start of the professional racing season.

Next year’s weekend-long festival of cycling kicks off with the mountain bike challenge in Addo on the Saturday followed by the road events in Port Elizabeth on the Sunday.

The 105km Classic, which starts and finishes at Hobie Beach opposite The Boardwalk Casino and Entertainment World, is known for its scenic coastal route around the “wild side” of the city.

The Herald’s chief marketing officer Justin Peel said some of the races have been rebranded and their distances adjusted to make them more accessible to the respective target groups.

The supporting road events for the Classic will be the 70km Pursuit and 40km Challenge.

On the mountain biking side, the 80km Extreme and 60km Adventure races have been streamlined to provide a better off-road experience, while the shortened 30km Powerade Leisure Challenge is aimed at fun riders. The Powerade-supported 5km Kiddies’ Challenge and 500m Toddlers’ Dash complete the categories.

As title sponsor of the Eastern Cape’s richest race, VWSA has contributed a substantial portion of the R100 000 winners’ prize purse. The automotive giant will also be giving away a four-door Polo Vivo 1.4 worth R123 000.

The vehicle will be the main prize in the attendance-only lucky draw at The Boardwalk Race Village. The pre-event expo and registration also take place in the marquee, which has been dubbed the “home of cycling”.

Additional prizes up for grabs include R50 000 in household appliances from Tony’s Furnishers, Appliances & Beds.

Enter online on www.heraldcycletour.co.za or at cycle shops in Nelson Mandela Bay. 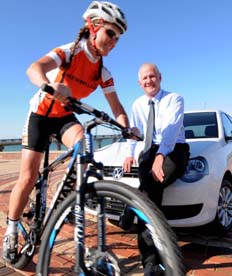