Former East Cape Cycling track commissioner Tony Cooney proved yet again that he’s not afraid of a challenge when he took on the role of road race director for The Herald VW Cycle Tour.

The organiser of the annual “Skrik vir Niks” event, which sees cyclists riding from Port Elizabeth to Cape Town, said he was looking forward to running the 27th edition of the national classic that takes place on February 4 and 5.

“I’m not a top-notch cyclist myself,” said Cooney, “but I have a passion for the sport and I like to see cycling flourish in Port Elizabeth.”

The 53-year-old, who first started riding as a junior, spends most of his spare time coordinating races on behalf of the local Masters and Ladies Cycling Club. “People who are familiar with our events know what to expect; they’ll get a decent ride that’s nicely controlled.”

The country’s second oldest classic is regarded as the traditional opening of the professional racing season, which normally guarantees a top field. With R100 000 on offer, it is also the Eastern Cape’s richest event.

Rising national star Tyler Day earned his debut victory for Team Bonitas at the 2011 event before going on to make it an early season double at the Cape Argus Pick n Pay Cycle Tour a fortnight later.

Cooney said the 105km Classic was one of only 14 officially sanctioned seeding events for the Tour, which is the largest individually timed cycle race in the world.

Top local rider Conrad Viljoen of Mecer-NMMU said the 105km Classic gave local riders the opportunity to test themselves against the country’s top pros. “If you race aggressively in the beginning and take your chances you might get yourself into a situation where you can compete for a podium.”

Viljoen said without an early breakaway, the race would probably end up in a big bunch sprint, which would not suit the local amateur contingent. “We don’t have the firepower to go head to head with the big pro teams when they give their sprinters lead-outs and that type of thing.”

With most of the country’s top professional outfits expected to show off their new teams for the first time in the Bay, Cooney encouraged families to make a day of it. “That’s the whole idea behind the weekend; to bring the family together as a unit.”

The Powerade-sponsored family events – the 21km Leisure Ride, 2km Kiddies’ Ride and 500m Toddlers’ Dash – take place on the Saturday in aid of the children’s charity Reach for a Dream.

The 105km Classic and its supporting events, the 70km Pursuit and 40km Challenge, follow on the Sunday.

Cooney said apart from a few minor changes, the routes would essentially stay the same as in previous years. “The feature race route remains unchanged and still has a six-hour cut-off.”

He confirmed that there would once again be prizes for the winners of the sprint primes (at Builder’s Warehouse on Buffelsfontein Road and opposite Altona Primary School in Greenbushes) and king of the mountains hotspots (on top of the Theescombe and Maitlands climbs).

Cooney said organisers had been forced to reduce the distance of the Pursuit event due to a Cycling South Africa (CSA) ruling preventing juniors from racing more than 70 kilometres. “In shortening it, we had to incorporate some hills and there will now be two points where they merge with the main race.”

Cooney said the Powerade Leisure Ride had also been reduced by nine kilometres in line with CSA regulations. “Anything over 21 kilometres requires participants to purchase a day licence and we wanted to keep it cost effective for families.”

Rolling road closures would once again be in force on all routes and he said affected residents would be informed in due course. “They can also refer to the race website for details.”

Cooney said The Boardwalk Race Village marquee on the grassed area at Hobie Beach would serve as the temporary “home of cycling” while the new conference centre is under construction.

Pre-race registration and the cycling expo take place on the Friday and Saturday and the event wraps up with the prize-giving on the Sunday.

Among the various lucky draw prizes, one fortunate participant will drive away in a new Polo Vivo 1.4 worth R123 000, courtesy of title sponsor Volkswagen Group South Africa.

Enter online on www.heraldcycletour.co.za or at cycle shops in Nelson Mandela Bay. 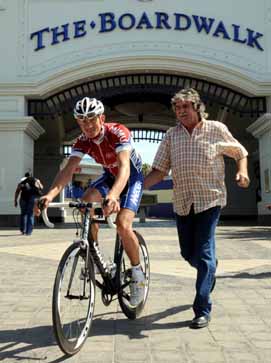