A growing demand for professionally organised mountain biking events in the Eastern Cape has seen two entrepreneurs start a dedicated business and take over the reigns of the off-road portion of The Herald VW Cycle Tour.

Earlier this year former competitive cross-country riders Brad Jackson and Julie Briggs, both from Port Elizabeth, started Mountain Events after witnessing a steady growth in the sport over the past five years.

As committee members of the Fat Tracks Mountain Bike Club, they noticed a lack of good quality events for riders in the province.

“Fat Tracks realised that organising mountain biking events was too big a job for a club and its volunteers to handle, so they approached us to do it and take the events to the next level,” said Jackson.

Their first big race was the national championships, which took place in PE’s Baakens Valley in May.

The success of this and other events, such as the Cyclo Pro Longmore Classic, prompted organisers of The Herald VW Cycle Tour to approach the pair.

According to Jackson, the tour’s mountain bike side, which started in 2006 and takes place in Addo on February 4 next year, has grown sufficiently to justify a dedicated coordinator.

He will act as race director while Briggs oversees the race village activities at the Addo Polo Club in her capacity as operations manager. As daughter of tour co-founder Rob Rudman, she is set to continue the family legacy.

“It’s definitely the big race on the Eastern Cape calendar,” said Jackson. “Our focus is very much on delivering an event that the riders will enjoy and a course they’re going to rave about.”

Their own racing experience has stood the two in good stead as event organisers. Briggs, 29, has represented South Africa at three downhill world championships while Jackson, 33, took part in the cross-country worlds as a junior.

“Having raced on world-class circuits, we know what the riders look for and what makes a good mountain bike race. That’s what we strive to deliver.”

In response to rider feedback, the 80km Extreme and 60km Adventure routes have been shortened by five kilometres each and will no longer include a portion of the Addo Elephant National Park.

Instead, the majority of the riding will take place along well-established mountain bike trails in the scenic Zuurberg area.

“We’ve cut as direct a route as possible from the start to get the serious mountain bikers up into the mountains as quickly as possible.”

The best male and female climbers in the Extreme will be rewarded at the king of the mountains hotspot at the top of the Zuurberg Pass.

Jackson said the new distance on the Adventure route also meant that competitive junior riders, who were previously excluded from racing further than 60 kilometres under Cycling SA guidelines, could now take part.

“The shorter 30km Powerade Leisure Challenge will still meander through the flat farmlands close to the start, making it ideally suited to families and casual riders.”

The 5km Powerade Kiddies’ Challenge and 500m Powerade Toddlers’ Dash will keep the younger members of the brood occupied.

All sections of the routes are accessible by quad bike and GardMed Ambulance Services and the PE Amateur Radio Society will be on standby to assist with medical and communications support in case of emergency.

According to Briggs, families can make a day of the event as food and refreshments will be on sale. Kids’ entertainment will include jumping castles and an inflatable soccer field.

Enter online at www.heraldcycletour.co.za or get an entry form from any cycle shop in Nelson Mandela Bay. 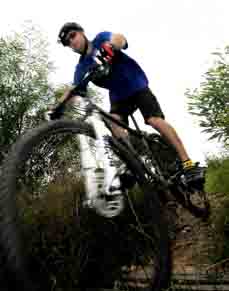 The Herald VW Cycle Tour's new race director for mountain biking Brad Jackson shows off his skills ahead of the off-road challenge on February 4 next year. Photo: The Herald