The third edition of the nine-day event, which sets off from Heidelberg south of Johannesburg on April 27 next year, will give daily winners a greater share of the increased R330 000 prize purse.

According to co-organiser Craig Wapnick the top men’s team stands to win R100 000 while the most successful women’s pairing will pocket up to R50 000.

“We’ve done this to keep the racing interesting. While for most this remains a ride across the country, the organisers and sponsors realise that we need to make it viable for the top pros to race this incredible route.”

He said the new system meant that rank outsiders could still have their day and benefit from a stage victory even though they weren’t in contention overall.

“Our philosophy has always been to boost mountain biking as a sport and to uplift aspiring and existing professionals from this country and elsewhere.”

Wapnick said the revised prize structure and “Ride Like a Pro” initiative, which makes sponsorships available to unsigned talent, were just two of the ways in which this vision was being brought to fruition.

By offering substantial rewards in the women’s category, he said organisers also hoped to assist in the development of this sector.

“We need to start encouraging more young ladies to take the sport seriously. We can’t do it alone but having a nice route and attractive prize money is a good start.”

Wapnick said stage prizes would only be awarded from days two to nine as a result of the untimed first stage, during which riders cross the Vaal Dam in Chinese dragon boats.

“We will announce the daily winners at the festive presentations in the race villages every evening and the overall winners will be revealed at the finish.”

He said in addition to the monetary incentives for the elites, other awards would be made in the non-racing categories. Non-competitive riders could also look forward to lucky draws and giveaways.

Wapnick said Team RE-CM’s Neil MacDonald and Waylon Woolcock, who won six stages en route to overall victory in the men’s elite section in 2011, would be back.

Although Team Bizhub were still finalising their 2012 schedule yesterday, Ischen Stopforth, who won the women’s race with British teammate Catherine Williamson, said defending their title was a priority.

The 910-kilometre course takes riders from Heidelberg in Gauteng across the eastern Free State and over the escarpment into KwaZulu-Natal, where it traces the famous BoE sani2c route between Underberg and Scottburgh. 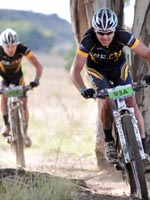